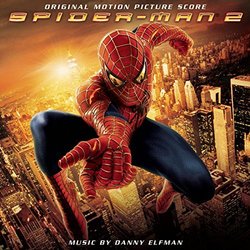 For his third comic-book sequel (following Batman and Men in Black), Danny Elfman took on scoring Spider-Man 2 by picking up where his score to Spider-Man left off, but brought it up a notch. In the film, Peter Parker (Toby Maguire) is still pining after Mary Jane Watson (Kirstin Dunst), but is found to be unreliable in his normal life because of his dedication to being Spider-Man. Where one might have expected a typical action movie, the film instead focuses on character development. Aiding only somewhat in all of this is Alfred Molina's Doc Ock character, a villain who really has no plans for world domination or anything like that - but rather is driven to see an experiment for a limitless energy source succeed - no matter what the cost.

While he revisited all of the themes from the original film (including the Green Goblin theme), the involvement of Doc Ock allowed Elfman to create a new theme, one that is punctuated at the tail by a rather Darkman-esque sequence of chords (or is it The Nightmare Before Christmas?). Either way, the theme is closer to Elfman's "old style" than his recent works. The same could be said about director Sam Raimi, who after the success of the first Spider-Man was given a little more latitude when filming this sequel. Doc Ock's escape from the hospital - while not scored with music - features Raimi at his Evil Dead best.

For the most part, Elfman's score is bigger and more confident than the first one. Even the choir in the "Spider-Man 2 Main Title" has more male chorus members, and gives it a stronger feeling. There among the action cues ("The Bank / Saving May"), we get plenty of emotional moments underscoring Peter's inner strife and emotional wrangling ("The Mugging / Peter's Turmoil). Towards the end of post-production, things were running tight and a few cues were replaced with music written by John Debney and Christopher Young. While neither of those two composers' contributions appear on the album, Elfman has opted to release the original cues he wrote for two sequences: "Train / Appreciation" is (obviously enough) for the subway chase sequence. It has a bit of a Mission: Impossible edge to it, and the rhythms certainly present that image. "Aunt May Packs" is a more emotionally touching cue than the one they ended up with in the final film.

The album wraps up with a nice one-two punch, as the Green Goblin theme is revisited ("The Goblin Returns"), and then Peter finally gets his due, with an optimistic version of the love theme, which segues into a nice climax of the main theme, just like the original film did. The main difference is that it ends on a slightly ominous note, giving us only a hint that there is much more to come. And finally, the optimistic Burt Bacharach tune, "Raindrops Keep Falling On My Head", performed by B.J. Thomas, which was used in a sequence midway through the film, ends the album.

Spider-Man 2 allowed everyone involved to take what could have been just another action sequel, and imbue it with plenty of character depth, emotion, and really push the story forward. Elfman's score reflects all of that, and he has certainly grown since the first film. I am eager to see what he turns out for the third film.