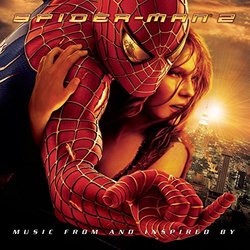 Spider-Man 2 surprised a lot of people by being not just a "comic book movie," but a great movie not hurt by its "lightweight" source. Similarly, I was also surprised - but not by the film. Rather, the soundtrack wasn't just a generic "soundtrack album," but a good rock album. This is a collection that, for once, lives up to the "songs inspired by" tag that often accompanies airplay-friendly discs comprised of songs not found in the film they're associated with. Yes, there's much angst to be found in the songs, but considering the movie, it's quite appropriate. Maybe not all the songs were written for the film, but even if not, they still largely support its themes.

One example is found in the powerful lead track, "Vindicated," by Dashboard Confessional, which can be interpreted as a Peter Parker anthem. This continues with the Train song, "Ordinary," going into the head of Peter, stuck loving Mary Jane Watson. Likewise, Yellowcard delivers a "new rock" friendly tune in "Gifts and Curses," revealing a Peter who can't stop thinking about Mary Jane, and as such is inspired to continue fighting crime. When was the last time in modern rock that the singers and guitars stepped back to allow a violin and piano to show off? Strong work. The seemingly-ubiquitous Maroon 5 delivers a chilled-out groove, again singing of about a man trying to understand his all-consuming love for the unnamed woman who doesn't return his affections. The Ataris contribute "The Night That the Lights Went Out in NYC." Yes, this deals with Peter's longing for Mary Jane; well, it seems it does. Smile Empty Soul's contribution reveals Peter Parker's resignation to his crime-fighting persona as his role in life.

"Give It Up" by Midtown brings some of their punk/pop blend to the album, and fits in well with the film's frustrated romance of Peter and Mary Jane. Even if not specifically written for the film, it works. Jimmy Gnecco (of Ours) and Brian May (of Queen and performing magnificently) contribute a love ballad that one could use to describe the love of Peter for Mary Jane and vice versa by the end of the movie In this vein, Australia's Jet delivers a tune directed at Mary Jane, possibly admonishing her return to Peter Parker.

I couldn't find a Spider-Man 2 tie-in for every song on the album; the Welsh group lostprophets delivers a crunchy tune that might be applied to Spider-Man getting the snot beaten out of him, which works for a metal band. A harder Hoobastank sings about stacking full advantage of one's life. Ana Johnsson's "We Are" is angsty and has guitars and has something to do with power and control, but had no apparent relationship to the film.

There are two tracks from the film's Danny Elfman score, one suite for the protagonist and antagonist each. They're nice for those who appreciate orchestral music; a more in-depth look can be found at SoundtrackNet's Spider-Man 2 score review. Like the largely lyric-free score album, this rock one is worthy of examination, and so gets four out of five stars.