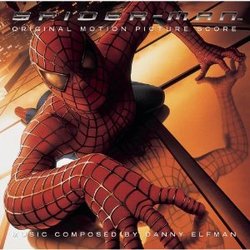 Swinging into theaters this past may was Sam Raimi's feature film adaptation of Stan Lee's classic superhero, Spider-Man.  In the first few weeks, it shattered nearly every box-office record possible, and while it won't give Titanic any concerns, it's still the biggest hit since the turn of the century.  The plot of the film is rather straightforward: High school student Peter Parker (Tobey Maguire) is bitten by a genetically engineered spider - thus giving him spider-strength (and powers).  Meanwhile, scientific mogul Norman Osborne (Willem Dafoe) decides to inject himself with his own "super-soldier" formula, to prove to the government that it works.  Unfortunately, he goes mad in the process, becoming the Green Goblin.  After a horrible accident forces Peter to take the law into his own hands, he decides to use his powers for good, and as such, must battle the Green Goblin who is terrorizing New York City.  Of course, there's Mary Jane (Kirstin Dunst) who Peter pines after, but she's busy dating his roommate - who happens to be Harry Osborn, Norman's son.  But should Peter save her enough times, maybe - just maybe - she'll start to come over his way.  Re-teaming with Raimi for the first time since 1997's A Simple Plan is composer Danny Elfman.

The "Main Title" contains a great presentation of two of the main themes in the film - the Spider-Man theme (heroic but not as "in your face" as the Batman theme was), and the more somber "responsibility" theme.  These two themes will show up throughout the score in various incantations.  "Costumes Montage" is a deliciously fun rendition of the Spider-Man theme, utilizing an electric guitar for coolness.  That segues into the "Revenge" cue, which starts off sad and emotional (I won't spoil what happens in the film), and then as his anger takes over, the orchestra builds until Peter leaps onto a wall.  Here, Elfman takes the complex layering of percussion and synth rhythms that he used on Planet of the Apes to the next level, as the orchestra eventually joins in with brash bold chords as Peter goes on his first swinging tour of Manhattan - while chasing a suspect.  It's exciting in the film, and fun on the album - and a Elfman certainly opens up his usual orchestral bag of tricks, with staccato brass, swirling strings, and that underlying percussion track.

"Transformations" starts off plaintively, and then seems to meander a tad, but it builds up to an orchestral culmination, all the while maintaining a dark "unknown" edge.  On the flip side, "First Web" is a playful bit of comedy, underscoring Peter's lunchroom experience with his web.  The Green Goblin's theme first shows up in "Something's Different", a dark melody played on tremolo strings, and overtaken brass.  In "Specter of the Goblin", cues from two different scenes are put together in a small homage to the green menace.  The first is the rather fascinating scene where Norman has a talk with himself, and Elfman uses uncomforting strings and percussion to underlie Osborn's growing schizophrenia.  The second half takes place when the Green Goblin explains his position to Spider-Man on a rooftop.  The Green Goblin theme is quite prominent, but ends with a rather poignant statement of the responsibility theme.

"City Montage" starts out with the responsibility theme, and then goes into a rather wild jumbled sequence of vignettes as Spider-Man does various good deeds throughout the city, all the while with the Spider-Man theme playing in different ways.  But no superhero Elfman score would be complete without the big set pieces.  "Parade Attack" is a great action cue revolving around the Green Goblin's theme, intermixed with variations on the Spider-Man theme.  "Final Confrontation", of course, is the finale of the film, and runs over seven-minutes long.  Elfman's subtle use of "The Itsy Bitsy Spider" is notable, as well as his exciting use of choir intermittently.

There is, of course, the romantic aspect to the film as well.  Mary Jane's isolation is underscored with a soft flute-based melody in "Alone", and is reprised in "Revelation", where a more sweeping rendition can be heard.  "Farewell" brings the Mary Jane material to a close, with a rather melancholy rendition of her theme as Peter realizes his responsibilities lie elsewhere.  This brings in a slowly building reprise of the responsibility theme, which builds to a climax with an exciting (and dare I say goose bump inducing) version of the Spider-Man theme, with choir, as (in one shot) he swings through the city and shows off his stuff.  "End Credits" is almost like a remix version of most of the themes from film, heavy on the synth and percussion.  It's a rather energetic, driving cue, and is a great way to end the album.

On a side note, "Farewell", as presented here on the score album, is actually about a minute or so shorter than the version on the song album.  That's a bit upsetting, but when you consider that the cue seems to rehash thematic material we've already heard, it's not that big a deal from a soundtrack-listening standpoint.  Coupled with the reality that this is a union score, and clocks in at exactly 45-minutes long, I can forgive this minor transgression and the fact some other cues that I would have liked to hear are also absent from the disc.  While Elfman's score isn't as blatantly heroic as his work on Batman was, it's still got plenty of themes and, like the film, heart.  This resulting thematic variety and depth is more than enough to keep this one in the CD player.