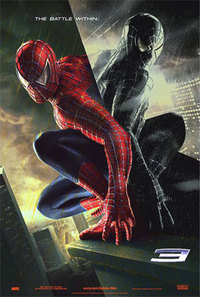 The first big film of the summer, Spider-Man 3 has been highly anticipated for a while, and many people are clamoring to see what happens in this next chapter in the saga of Peter Parker. Taking place where the second film left off, Parker (Toby Maguire) is hoping to ask his girlfriend Mary Jane Watson (Kirsten Dunst) to marry him - but everything seems to get in his way. His ex-best-friend Harry Osborn (James Franco) is out for revenge for the death of his father that he blames on Spider-Man, and an alien symbiot has bonded with his suit, channeling his agression and making him more reckless. This results in a perceived relationship with Gwen Stacy (Bryce Dallas Howard), much to MJ\'s chagrin. Also, Peter is dealing with the new kid on the block, Eddie Brock, Jr. (Topher Grace), who is vying for Peter\'s photographer job at the Daily Bugle. And if that wasn\'t enough, apparently the real killer of Peter\'s uncle, Flint Marko (Thomas Hayden Church) is on the loose - but has been changed into sand at the molecular level, becoming the villainous Sandman. Will Peter and Harry settle their differences? Will Spider-Man deal with Sandman? Will MJ and Peter save their relationship? Will Brock get Peter\'s job? All will be revealed in the film, and it takes a solid 2.5 hours to do so.

Clearly there\'s plenty of stuff is going on, and it\'s never boring. While it\'s never confusing, it does feel a little \"full\" at times. Director Sam Raimi doesn\'t have as much of the stylistic visuals that he\'s known for, but the visual effects (at least in the digital projects I saw it at) was quite crisp and clear. At times the visual effects were suffering from obvious artificiality, but other times, such as the birth of Sandman, the effects were amazingly done. It cost over $300 million to make this film, and while it\'s entertaining, I can\'t see why anything would ever cost that much - especially when a movie like Raiders of the Lost Ark cost only $18 million to make in 1981, even though it had significantly fewer visual effects. As cool as visuals can be, Hollywood needs to focus on story first.

The music, by Christopher Young, uses Danny Elfman\'s themes from the previous films, and he created new themes for Sandman, Venom, and Black-Suited Spider-Man, all of which nicely in the film. There was apparently some musical funkiness behind the scenes, as some sequences have music tracked in from the previous films, including a few new cues composed by Debbie Lurie and John Debney, using Elfman\'s material. Still, Young\'s material shines through, and this is a great opportunity for this underrated veteran composer to get more visibility.


The story that plays out in Spider-Man 3 wraps up the trilogy nicely, while leaving some openings for future installments. It\'s not a perfect film by any means, and is not as tight as the second film. It will be interesting to see if Raimi returns for another one, but I hope for his sake, he takes a break from the franchise and returns to his roots.