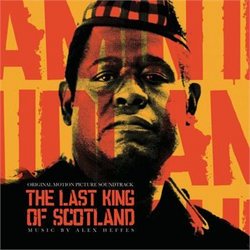 The Last King of Scotland

Review: Last King of Scotland, The

As befitting a film that largely takes place in Uganda during the early 1970s, the soundtrack for The Last King of Scotland features a strong helping of songs featuring singers and styles straight from the African continent. But the album is also an eclectic mix that eventually loses some of its grip on musical cohesion. It\'s somewhat of a haphazard potpourri that often jumps from upbeat vocals to ominous instrumentals; as a result, the compilation can\'t help feeling disjointed. However, The Last King of Scotland ultimately is a fresh and engaging musical mélange.

The first track, Momo Wandel\'s "Toko", sets the mood with a steady acoustic beat that features a gentle sax interlude and a melodic male chorus that contrasts with Wandel\'s sometimes guttural but forceful singing. However, more upbeat, fast-paced and rhythmic approaches characterize the majority of the album, most notably in Percussion Discussion Africa\'s celebratory "Nakawunde", as well as in Tony Allen\'s "Afro Disco Beat" and Oscar Sulley & The Uhuru Dance Band\'s "Bukom Mashie", both of which prominently feature sax over their catchy beats.

Some of the songs sung in English include the exuberant "Save Me" by E.T. Mensah & The Tempos Band, and Angela Kalule\'s heartfelt, folksy "Me and Bobby McGee". The Nyzonza Singers\' "The Bonnie Banks O\' Loch Lomond" is also a stirring and memorable ballad, mostly sung with minimal instrumentation. However, as the only traditionally European song of its type on album, it just sticks out too much (especially since it leads into the fast-paced, sax-centered "Bukom Mashie").

Composer Alex Heffes\' contributions prominently feature driving string and atonal synth to create dark, tense moods, as in "Idi\'s Story" and especially "Getting the Evil of Nicholas." Also, "Press Conference" is particularly notable for the grim, haunting synth underscore in its latter half. Fast-paced percussion in "Ambush" and frenetic brass statements in "On the Runway" succeed, at least partially, in blending with rhythms used in the songs that dominate the album.

On the whole, however, Heffes\' inclusions, as effective as they are individually, feel like they belong to a different album. Mood is the biggest division between these instrumentals and the songs; switching from uplifting and upbeat to dark and menacing produces something of a musical whiplash.

Still, diversity on album is by no means a drawback, and The Last King of Scotland is notable for its inclusion of African songs, which would most likely broaden anyone\'s musical palate. It\'s a unique soundtrack that\'s somewhat schizophrenic, but for the most part, will offer something fresh and new to the vast majority of listeners.