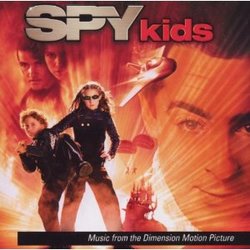 For his first family-oriented film, director Robert Rodriguez decided to make a spy film. But not just your average "save-the-world" film - Spy Kids features a pair of spies that aren't even old enough to drive, and set out to rescue their spy parents from the evil Floop.  Sufficed to say, the end result was a highly entertaining and high-energy film that appeals to people of all ages.

For the music, the Rodriquez had Danny Elfman write a song that is featured in the film.  This song was then taken by composer Chris Boardman and used to write new music for the film.  Then Harry Gregson-Williams, Gavin Greenaway and Heitor Pereira (all from Media Ventures) were penned to score the film.  But it doesn't end there.  The musically talented Rodriguez and old-time collaborators Los Lobos hammered out a killer track (more on this later).  Then Elfman came back and worked on the Spy Kids theme - which was then orchestrated and arranged by John Debney.  Debney also wrote a few cues for the film.  But that's not all - other people contributed to various aspects of the score, and all told, there were nine composers on this film.  Potentially, this could have been a disaster.  Instead, the result is a mesh of styles that works surprisingly well and never seems to feel awkward or forced.  Think a "Latin James Bond".

Gregson-Williams, Greenaway and Pereira came up with the "Cortez Family" theme, a nice cue with (of course) plenty of Spanish guitar.  It's tender and gentle, and represents the core of the family.  Hinting at bits of Men in Black, "My Parents Are Spies" is vintage Elfman.  Debney joins the gang with "Parents On Mission", a rousing action cue that's builds to full-on excitement while mixing Elfman's and Gregson-Williams / Greenaway / Pereira's themes.  "Kids Escape House" reminds me a bit of Antz (no doubt due to Gregson-Williams' style).  There's more action in "Pod Chase" and "Buddy Pack Escape".  Los Lobos and Rodriguez do a great Bond-styled action cue based on Tito Puente's "Oye Como Va" - appropriately titled "Oye Como Spy".  It has all of the big brass and percussion you expect, with a bunch of electric guitar thrown in to boot.

"Floop's Song (Cruel World)" is the most traditionally "Elfman" song you will hear this year.  It's a combination of something from The Nightmare Before Christmas and Elfman's demo work, Little Demons.  It's disturbingly short, but that's all that's in the film.  "Spy Go Round" sounds like Elfman - especially with the choral - but it's actually a Greenaway / Pereira / Rodriguez composition (Robert's brother Marcel joins in here as well).  The finale of the film comes quickly, in the form of "The Spy Plane", "Floop's Castle" (Chris Boardman's big cue), and "Final Family Theme".  The last track song, "Spy Kids (Save The World)" feels tacked on, and more for the kids than the score-listeners.  But it's at least a song about Spy Kids, so it's not completely out of place.

Now the track I wanted to save for last.  "Spy Wedding" was written by Rodriguez and Los Lobos, and anyone who has been reading my reviews long enough knows that I am a complete sucker for choral music.  In this case, Los Lobos did a great acoustic guitar set, and Rodriguez - continually impressing me with his variety of skills - orchestrated the chorus and orchestra over it.  It's moving and dramatic, and worked exceptionally well in the film.  The repeat button got hit a few times on this one - I only wish it ran longer than the 2:12 it actually runs.

The entire album is only 31-minutes long, no doubt due to horribly complex licensing and royalty issues stemming from the variety of composers involved.  Nonetheless, this is a highly enjoyable album that worked in spite of having what would seem to be too many people working on it.  If you haven't seen the film, do go see it.  Now.  If you don't have the album yet, go buy it.  Now.  You won't be disappointed.