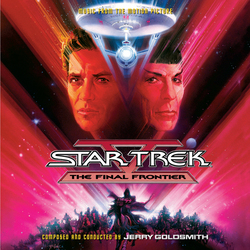 By popular demand, Intrada has re-issued the expanded edition of Star Trek V: The Final Frontier, featuring Jerry Goldsmith's colorful and exciting score. As a follow on to his masterpiece score to Star Trek: The Motion Picture, this score takes off where his first score left off. While The Motion Picture allowed Goldsmith to establish themes that would become rooted in the Star Trek franchise, that film required a score of atmosphere and awe—focusing on the mystery, grandeur, and beauty of space. For Star Trek V, high-adventure was the order of the day, requiring a colorful, exciting, action-packed score.

In 2010 La-La Land Records released a long-awaited 2CD expanded edition of Star Trek V: The Final Frontier. Their 5,000-copy limited edition sold out in months. While other expanded Star Trek albums were not limited and remain in print, this rapid sellout created a hole in the catalog, so Intrada has decided to put it back in print. The CD program is identical to the already perfect presentation created by La-La Land Records, although packaging has been updated to fit in with the design of the Star Trek II, III, IV and VI packages.

Star Trek V: The Final Frontier (1989) was the penultimate film to star the original cast of Star Trek. After Leonard Nimoy (Spock) directed the third and fourth entries in the series, Paramount Pictures awarded Star Trek V to William Shatner (Kirk), whose story input resulted in an action-adventure exploring religious fanaticism, the human yearning for God, and the familial nature of Kirk, Spock and McCoy (DeForest Kelley)—with touches of humor inspired by the commercial success of Star Trek IV: The Voyage Home (1986).