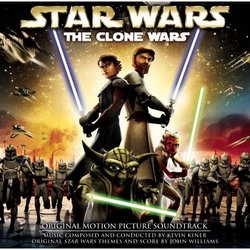 While Kevin Kiner landed a highly coveted scoring project, he also stepped into what will possibly the most highly scrutinized scoring project in recent years, taking the reins from John Williams for George Lucas\' new animated Star Wars franchise: The Clone Wars. My first reaction was lukewarm, as Kiner\'s use of Williams\' themes was minimal and much of his orchestrations are very un-Williams, some even including electric guitar riffs. That having been said, looking back on the film score now as the first season of the television series comes to an end, one has to understand Kiner\'s approach in the realm of a film that launched a 100 episode story arc rather than a stand-alone score. I will not be reviewing the television score here, hopefully that will come later. However, I do feel that I should say that I have become more and more impressed with Kiner\'s scores as the show progressed (especially for an episode called "Trespass"), and this makes me look back more favorably on what he did for the film.

Immediately obvious to even casual Star Wars fans is the abbreviated main theme. Segueing into a major battle sequence, like most of the original films, Kiner\'s orchestrations clearly parallel Williams\' sound and bold themes in the brass stand out, as in "Admiral Yularen" and "Battle of Christophsis". Behind the soaring strings in the latter track, Kiner throws in a chanting male choir and pounding percussion, which is a common element that returns in cues such as "Anakin vs. Dooku". "Meet Ahsoka" introduces one of Kiner\'s major new themes, for Anakin\'s new padawan. In the short score featurette on the DVD set, Kiner mentions that this theme is fairly simple, but he made it easily recognizable by playing with the chords, using a G-minor to E-flat, often performed on woodwinds. The theme is better heard in "General Loathsom/Ahsoka" and the opening of "Escape from the Monastery". Other characters are given styles more than themes, for example Ziro is given a jazzy swing feel with a wailing saxophone. I find these cues annoying and out of place (i.e. "Ziro\'s Nightclub Band") but they generally work for the scenes.

"Obi-wan to the Rescue" introduces some strange orchestrations for the Star Wars universe, that of a heavy electric guitar, which I know won\'t sit well with some hard core Williams fans; this also reprises in "Courtyard Fight". However, the goal of this entire Clone Wars series is to expand the Star Wars universe on film, and with that comes the challenge of expanding the musical sounds. After multiple listens, I think the guitar fits in well alongside the orchestra. Other actions cues are very in-line with Williams frenetic orchestral sound, such as "Destroying the Shield". As a whole, Kiner does an excellent job inching his way into this universe. While his themes are not quite as instantly recognizable as Williams, nor does he use a lot of Williams\' originals, he has a number of themes for worlds and characters, although I won\'t get into them here. I will say that Kiner has somewhat of his own "main theme" which is a bold anthem, of sorts, and can be heard in "Battle of Christophsis" and "General Loathsom" and is as close as we get to an Anakin Skywalker theme.

What Kiner does to a greater extent than Williams is create literal soundscapes for the multiple planets in the Clone Wars series, something he expands in the subsequent television show. For example, for Tatooine, Kiner uses ethnic percussion and Japanese instruments, including the shakuhachi, for the desert planet, not the expected duduk and Arabian sounds for desert planets. Cues such as "Jabba\'s Palace" and "Dooku Speaks with Jabba" use this, and it works well for the planet, although it is not the way Williams approached it. Another world featured in this film, Teth, features a near eastern/north African style, as in "Landing on Teth" and "B\'omarr Monastery". This effect is created with a female vocalist and ethnic percussion. Another Teth cue, "General Loathsom/Battle Strategy" opens with a bold French horn solo and is followed by a middle-eastern motif that is reminiscent of Goldsmith\'s 13th Warrior theme. Such ethnic instrumentation are also mixed with the orchestra, especially the brass, to maintain the overall feel of Star Wars and works well. Williams did a lot of this for The Phantom Menace, especially the Tattooine scenes, but Kiner takes this to a new level and is his greatest contribution to the musical universe.

I know many fans were disappointed that the only theme we heard from the original films besides the main title was a solo trumpet statement of the Force theme at the end of "Fight to the End", and I was as well. However, having heard Kiner\'s continued work now at the end of the first season of the TV show, I must say he has done an excellent job at expanding the music of Star Wars and adding a unique flavor for each new world the show visits. Taken as the first episode of this epic series rather than a stand-alone movie, Kiner\'s score for Star Wars: The Clone Wars takes on new meaning and, granting him the necessary creative license to pay homage to but move away from Williams\' style, is very well done. I hope there is a soundtrack release for season one. Fans may also be interested to note that the album artwork layout is done the same was the prequel films including the poster on the inside, which is nice for continuity. My rating for this album is based on the fact that there is a lot of room for improvement for this score, but judging from the first season, it has been moving in that direction.