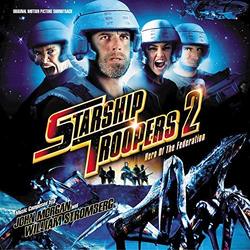 Starship Troopers 2: Hero of the Federation

Performed by
The Moscow Symphony Orhcestra

So far, this season has been overrun with sequels. Few weeks have passed without a rehashing of two or even three summers ago. These movies have run the gamut from worthy entries in an on-going series to creatively questionable to those better left on the shelf. What has been most interesting has been the number of sequels made for movies that did not seem to demand a second installment. Studios, understanding the cache of a name brand and eager to release a sure-fire money maker, have combed their libraries for any possible new franchise.

Unfortunately that attitude propelled someone to make the decision that a direct-to-video sequel of the campy hit Startship Troopers was a good idea. Since the appeal of that movie was obviously the giant CGI bugs, then a successful sequel would involve great CGI and little else, right? Wrong. In so many ways. Your first hint that this sequel should be avoided is that not a single actor from the original returned. Not one. Their replacements, shackled with a plodding script (that greatly resembles the first film) and awkward dialogue, deliver over-the-top performances while shooting obviously fake weaponry. Missing the tongue-in-cheek appeal of the first movie, this sequel quickly becomes tedious except when the bugs are onscreen because, well, they certainly know how to blow things up with CGI.

Fortunately someone is still looking back and seeing what made earlier films great. John Morgan and William Stromberg are well-known to film music fans for their decade-long crusade to reconstruct and re-record classic scores ranging from a host of classic horror films to King Kong to The Adventures of Robin Hood. Their work on these scores has been marvelous, pain-staking, and an absolute delight. It also possibly inspired their decision to work on what could have been a modern-day campy horror film.

The result of their work on Starship Troopers 2 is a mixed bag. It is a full, rich score release, with thirty eight tracks and over seventy minutes of music. It is a symphonic score recorded with depth and clarity by the Moscow Symphony Orchestra. It works well with the action depicted onscreen. It is also full of concessions to the directors and strange cliches. The very first cue is an obvious re-working of Hans Zimmer's Backdraft score (a fact Morgan and Stromberg admit and say the director requested). The cue "Reunion" sounds like every other similar moment in military films. A lone trumpet carries a melancholy melody which is softly answered by another trumpet. This dialogue is then underscored by strings and a single snare drum tapping a military cadence. The cue is well-done, but we have heard it too often before. Still, for every cue like "Reunion," there are several cues like "Vengeance" where the duo builds tension in a Hermannesque manner with pulsating, dissonant chords that move into an aleatoric passage complete with the strings being hit with the wooden part of the bow. The cue's texture continues to shift among passages such as this one, grand brass statements, and almost complete stasis with the strings slowly building and shifting chords. It is a masterful cue, one that shows deft command of symphonic resources and an ability to use them to generate extreme tension.

But, as is true with most sequels, Morgan and Stromberg's work for Starship Troopers 2 is burdened by their past successes. A few weeks ago I reviewed the incredible recording they made of Korngold's Robin Hood. That score stands as one of the greatest action/adventure scores ever made, sparkling with wit and exuberance even sixty years after it was composed. Morgan and Stromberg's Starship Troopers 2 comes across as a slightly pale sequel. It struts and boasts some fine symphonic writing (the pair have obviously learned from their labors of love reconstructing old scores), but it lacks the cohesion and panache of Golden Age scores. Still, I'll take a score that celebrates old-fashioned symphonic scoring any day in a summer where revisiting movies from a few years ago that should have been left alone is common. It has me worrying and waiting to see what they do with Troy 2: City Reborn.