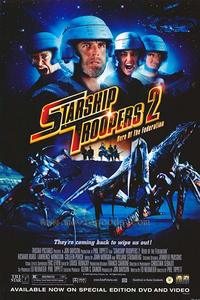 Starship Troopers 2: Hero of the Federation

After suffering through Starship Troopers 3: Marauder, I now bring you the first sequel to the 1997 Paul Verhoeven satire, Starship Troopers 2: Hero of the Federation.  Directed by visual effects guru Phil Tippett, this direct-to-video movie drops all of the satirical and tongue-in-cheek overtones from the first film, and instead brings us a rather paint-by-numbers showdown movie that owes plenty to the old "last stand" Westerns of the last century. The movie follows a gang of Federation soldiers who have been pinned down by the Bugs on a remote planet.  As they hunker down to fight the bugs, the soldiers deal with interpersonal conflict, and while they wait for rescue they discover a new type of Bug that might be the downfall of humanity.  While the film tries to be more cerebral than action-oriented, the problem is that it\'s almost all generic action for the first 2/3 of the film, and by the time they try to give it a storyline and develop the characters, you just don\'t care anymore.

Released on DVD back in 2004, and now on Blu-ray as part of the Starship Troopers Trilogy Pack (not available separately), the movie was shot on HD, on soundstages, and you can definitely tell.  With a seriously limited budget, much of the film is dark and murky to mask the cheapened visual effects and sets, with a bit of grain/noise, and it just doesn\'t look that good. But when things are brighter and lit up nicely, the HD image shows through cleanly. It\'s not a transfer to gloat about.  Surprisingly, the Dolby TrueHD 5.1 track is actually pretty solid. It\'s not going to blow you away, but it\'s immersive and reasonably well balanced.  The music by composers William Stromberg and John Morgan doesn\'t get drowned out too much, and dialogue is relatively clear.

The special features on the Blu-ray mirror the same extras found on the 2004 DVD release.  A commentary track features director Phil Tippet, screenwriter Ed Neumeier and producer Jon Davidson, and is surprisingly candid.  They talk about the challenges posed with adapting what they thought was a decent screenplay without a budget, and it seems as though the whole project could have been a lot better if given the time and money to do it right.  The 30-minute long featurette "Inside the Federation" mirrors the commentary, with a look at the challenges faced in the filmmaking process with such a limited budget, and how some of the visual effects were handled.  "Green Screen to Silver Screen" follows three visual effect shots from storyboards through completion, narrated by Eric Leven, the visual effects supervisor.  Finally, trailers for Starship Troopers 3: Marauder, Men in Black, CJ7, and Close Encounters of the Third Kind are included. No trailers for Starship Troopers or Starship Troopers 2: Hero of the Federation. Oh well.

Starship Troopers 2: Hero of the Federation isn\'t likely to be a movie to watch more than once. Hindered by a lack of money, the film couldn\'t achieve what the screenplay set out to do, and the result is a low-budget direct-to-video flick with a few neat-o visual effects.  Since you can\'t get the film unless you get the Trilogy pack, I\'d say, just go get the first one - and see if this one is available for rental. It\'s worth it for the commentary, but that\'s about it.