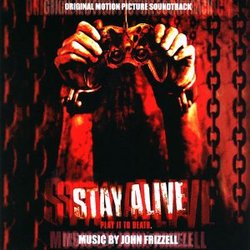 Based on a video game, Stay Alive is another in a glut of horror films for 2006, most of which feature interchangeable, disposable casts, inconsequential plots and an ugly, mean-spirited demeanor. Apparently, this offering concerns a group of teens (as usual, only teens get themselves in these situations) who investigate clues to a friend\'s death within a labyrinthine, online game. John Frizzel provides the atmospheric score.

"Enter The House" opens the album in an ominous fashion, with furious strings, bells, electric guitar and creepy, pulsing synth sound which almost resembles a cackle. "Loomi\'s Funeral" contains an echoing, lonely piano melody, which is then repeated by harp against light strings. At six minutes, "Playing the Game" is the lengthiest track on the album and begins with nervous string ostinato before moving into an electronica rhythm set against the piano melody from the previous track. The "cackling" synth effect returns and this can be heard as the basis for the string ostinato being developed more fully as the cue progresses. This also continues into the latter half of "Finn Plays Alone", while "Strange Things" contains some atmospheric, repeating electronic textures.

"Investigation" is allowed a bit more time to develop, starting with a curious piano pattern, moving through staccato strings and electronics and back to the piano again. Furious strings and the creepy synth open "Phil Dies" with a jolt, while "Mourning Phinn" and "Butch\'s Story" chart a similar path to the melancholy piano and strings instrumentation of "Loomi\'s Funeral", but with a fuller string presence. "Loomi\'s House" opens in an atmospheric guise but soon the pace quickens through a piano and string ostinato. Startling jolts open "End of October" and "Winning By a Rose", the former through racing, fevered upper strings and the latter in electronic loops, but also in continuing the recurring, insistent string ostinato.

"Abigail Is Captured" is another frantic track, but also the first time we hear an element of brass fleshing out the ensemble, so it adds a fuller dimension. In "Final Encounter" the rising tension leads to a surprisingly lyrical string passage, opening the score up past the mood and terror. The last track is a brief recap of the main material, namely the stringent, racing strings and repeating electronic pulses. Overall, the music covers the requisite ground for the films in today\'s horror genre. Frizzell sticks to a palette of piano, strings and electronics, so at least he avoids the temptation to beef up the score with too many players and a choir. However, there is not much opportunity to create a lasting, memorable effect with the music.