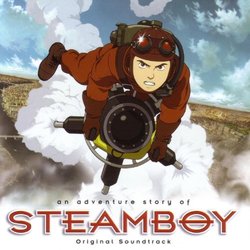 Some of the best music to come out of Hans Zimmer's Remote Control studios (formerly Media Ventures) has come from solo projects by its composers, the most notable being the recent work of John Powell and Harry Gregson-Williams. Remote Control has also branched out geographically: in 2001, Harry Gregson-Williams took on the duties of scoring the Japanese video game Metal Gear Solid 2: Sons of Liberty. Most recently, Steve Jablonsky - who wrote additional music for MGS2 as Gregson-Williams' assistant - released the culmination of a two-year project for the Japanese anime film Steamboy by Katsuhiro Otomo, the director of the critically acclaimed film, Akira.

Steamboy tells the story of Ray, a young inventor in 19th century England, and his adventures in a science fiction world of machines, rivaling those from the world of the Matrix. Complex animation and CGI makes this one of the most visually impressive films of 2004, and Steve Jablonsky's adventurous score is everything one would expect for an epic anime and more. The score is almost purely orchestral, and covers a wide expanse of styles, from racing strings and pounding percussion to soaring brass. The album opens with the atmospheric "Manchester 1866" which presents the main theme. The music quickly shifts to "The Chase", a stunning action cue which is similar to the action from Pirates of the Caribbean, which Jablonsky also worked on. "Scarlet" shows the more playful side of the music in a short, but fun cue. This playful, almost child-like, side of the music continues in "The Atelier of Ray" and "Crystal Palace Waltz", which present a version of the theme that sounds like Nick Glennie-Smith's Man in the Iron Mask.

The action returns in "Ray's Dilemma", backed by both pounding percussion and marimba, and continues for most of the second half of the album. The music never slips into the standard "Media Ventures" sound of electronic action and maintains an organic feel that is absent from many modern scores. "Launch" opens with a drum ensemble and segues into the climax action cue. The score then takes a turn toward a larger, epic feel in "Fly in the Sky" which features a full brass presentation of the main theme. The highlight cue is the eight-minute track "Collapse and Rescue" with moving percussion and string lines like what Jablonsky wrote for Zimmer's Tears of the Sun ("The Jablonsky Variations on a Theme by HZ / Cameroon Border Post") that builds throughout the track into a brilliant brass cue. The album closes with a restatement of the main theme in the woodwinds in the same atmospheric tone as the first track, but ends with a brass finale of the theme.

Jablonsky - who has stood in the background of Media Ventures for years - finally makes his appearance as a main composer and he does so with brilliance. His first solo score was for last year's The Texas Chainsaw Massacre, but Steamboy puts that clichéd horror score to shame. He has written a gorgeous theme that he works into the score as often as possible. Jablonsky also takes every opportunity to build the music into great action/adventure cues worthy of an epic film such as Steamboy. Critics of Media Ventures should listen carefully to this score to see what some of its composers can really do.