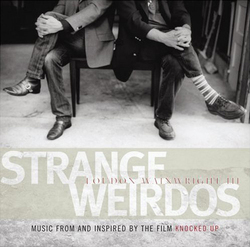 Strange Weirdos - Music from and Inspired by the Film Knocked Up

Review: Strange Weirdos: Music From and Inspired by the Film Knocked Up

Most song albums are released for blatantly financial reasons. A movie is a hit (or designed to be one) so an album of "songs inspired by" is rushed into stores. Are the songs featured in the movie? A few. Do they match the movie\'s tone or subject matter? Vaguely.

So it was a pleasure to learn about Loudon Wainwright\'s new album Strange Weirdos: Music from and Inspired by the film Knocked Up. Judd Apatow, the director of Knocked Up has long been a fan of the perpetually under the radar Wainwright; he gave him a part playing a priest in his 40 Year Old Virgin. But he never considered asking the singer-songwriter to compose the score for one of his movies until he heard Wainwright perform what ultimately became the first song on Strange Weirdos, "Gray in L.A." That song, one of the best on the album, gently makes fun of the iconic L.A. lifestyle with lines like "When its gray in L.A./ it\'s much better that way/ it reminds you that this town\'s so cool/ it might feel like fun when you\'re sporting sunglasses/ but really you\'re just one more fool." Apatow realized the song\'s sensibilities meshed perfectly with those of his movie, and he hired Wainwright to write the film\'s music.

The result is an actual album of "songs inspired by" Knocked Up. Wainwright, whose voice is reminiscent of Bob Dylan\'s and whose lyrics could come from Randy Newman, has beautifully captured the film\'s successful formula of being raucous and funny one moment and tender and introspective the next.

To give you a sense of this tension and how Wainwright expresses it, let\'s look quickly at two songs, "Daughter" and "X or Y." "Daughter" is a cover of a song by Peter Blegvad, and Wainwright juxtaposes quiet lines about a father/daughter relationship with almost jaunty vocals. The song swings between the father\'s obvious love and pride in his daughter with lines like "That\'s my daughter in the water/ everything she knows I taught her" and exasperation with her though comments like "That\'s my daughter in the water/ I lost every time I fought her." Holding these moods together is a driving folk idiom, the sound that permeates most of the album.

In contrast, "X or Y" is a rollicking gospel song that begins with only guitar and slowly builds to a full band, chorus, percussion, and even piano and organ. In capturing the gospel idiom, Wainwright makes this song the album\'s musical standout. But what truly makes the song work are the lyrics which place a large part of responsibility for a pregnancy on the man, a welcome shift from most of our cultural ideas that put the onus on the woman. "It might feel like fun," he sings, "but some work\'s been done/ it\'s not just sex/ its Y or X." This sly sense of humor gives depth to so much of the raunchiness of Apatow\'s film and shows why the director was right to hire Wainwright.

There are several other humorous songs, including a few that gleefully delve into uncomfortable topics, a new cover of his own "Lullaby," and songs that deal with aging and personal connections. There are also, in the midst of the songs, two instrumental cues, "Ypsilanti" and "Naomi." Both make fine gentle background music, but neither has a strong hook to keep you involved.

In fact, while the album matches the movie it accompanies, there are few hooks to keep you coming back. Wainwright\'s strengths are definitely in his lyrical prowess. When you take away the lyrical irony and introspection, you are not left with much. Musically the album is not adventurous, but merely rehashes older tropes. As an album, then, it feels ordinary. Yet in an age where movies and most paraphernalia associated with them feel overblown, a bit of the ordinary is a welcome respite.