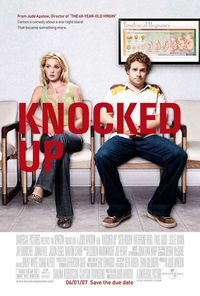 Knocked Up, the latest film from The 40 Year Old Virgin director Judd Aptow, is a heartwarming comedy about an accidental pregnancy, and the choices and responsibilities subsequently made. Ben Stone (Seth Rogan) is a beer-drinking, pot-smoking slacker, whose only real dream (along with some of his friends) is to create and launch a website detailing when actresses appear nude in films. Alison Scott (Katherine Heigl) is a segment producer at E! Entertainment Television, and has just been given a big break - she will appear on air. When she goes out with her sister Debbie (Leslie Mann), she meets Ben - and the two have a drunken one-night stand. Weeks later, Alison discovers she\'s pregnant, and hunts down Ben to break the news to him. Insistent on keeping the baby, Alison and Ben start to build up a relationship and try to work through their differences while dealing with the various challenges that the pregnancy throws their way.

Knocked Up is a well done film, with solid performances from the lead actors, as well as some rather funny moments which add levity to the otherwise heavily dramatic (and sometimes moral) situations that are presented. When the film was over, there was a strong sense of satisfaction with the film - one that diminished slightly upon further reflection. The biggest problem the film has is that, with two lead characters who are so different, they should try to meet in the middle. Ben ends up changing his life, and making a concerned effort for things to improve so that he can not only be a responsible adult, but also be there for the baby and for Alison. But Alison never changes - she remains the same character she was at the beginning of the film. This lopsidedness rubbed me the wrong way, but the film is still very well done and enjoyable.

The music was done by Loudon Wainwright III and Joe Henry, and works very well. A contemporary approach was taken, with plenty of songs filling the sound palette, and the underscore contains a rather melodic sensibility. The soundtrack album is all done by Wainwright, but is \"inspired-by\" the film, using some pieces that appeared in the movie, along with pieces that evoke the same emotional response. In all, Knocked Up was a well done, if not slightly flawed, film that is definitely worth checking out.