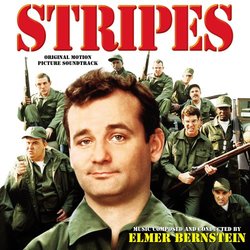 Within the past month we've had two Stripes related releases, one worthwhile, one not so much. Luckily for all of you faithful readers, I'll be reviewing the welcomed and worthwhile Varese Sarabande issue of Elmer Berstein's classic 1981 comedy score now on CD. This was surreptitiously released in conjunction with the "extended cut" DVD, which offers eighteen minutes of deleted scenes, and once again folks, they were deleted for a reason.

I have to admit, I've had this score in my collection for a number of years, but not by the means as which the ordinary consumer can now hear this, in the overwrought and over used phrase, "classic" Bernstein comedy score. It seems that when you pair up Ivan Reitman with Elmer, you're bound to always get good work (Ghostbusters, Animal House) and Stripes is no exception. Almost akin to Bernstein's work on The Great Escape, the CD opens with the "Stripes March", a piece that is excerpted and interwoven throughout the score in various bits and pieces, altering the motif of the given scene on screen.

Outside of the jaunty and comedic straightforward march, there's the "Winger/Depression" piano melody that in the movie, makes its first entry when we're introduced to Bill Murray's character, taxi-driver John Winger, as it seems his life is going from bad to worse. He gets stiffed on a cab fare, picks up the fare from hell (and leaves her hanging), has his car repo'ed, pizza dropped, and girlfriend leaving, and to top off the desperation, when losing his basketball, gets it thrown back through, at the time, an unbroken window in his apartment. I've had a bad day or two in the past, but Murray's Winger definitely has it topped, and this short piano cue that is resurrected in many forms (even in a solo upright version) shows up when even John looses his will and is about to give up.

The next few cues on the album show up as your standard training and boot camp montage material, where after his buddy (portrayed by Harold Ramis) enlists with him in the Army to find "direction" to their lives, we're introduced to the rest of the crew including John Candy and a very young Judge Reinhold. It is great music when accompanied with the anti-Band of Brothers type of "ho-rah" Army training scenes, but harkens Bernstein's work to come in similar sequences in Spies Like Us.

A number of tracks, such as "Cops" and "Home", have the string and brass (solo muted trumpet) that show up in later 80's Bernstein scores, from Rambling Rose to Ghostbusters. It's gentle, and kind of nice, but having heard it throughout the 1980's in retrospect, it ends up sounding trite and overused here, even though this probably was the progenitor piece for those to come. Another take on the "Stripes March" is used as a team motif, although not exactly as a direct descendant, but shares much in common with "Graduation March", which appears elsewhere in the score and film when more than a few of the platoon members are doing "something", whether it be mud wrestling women, to invading East Germany. There are even some ethnic-styled music when the team makes their way by the East German sentries (with one played by "Maniac Mansion" star and fellow "SCTV" alum of John Candy's, Joseph Flaherty) and into the supposed prison compound. [If you're quick to spot more "Second City TV" members, don't forget the cameo of Dave Thomas (Doug MacKenzie of "The MacKenzie Brothers") as the emcee in the mud-wrestling bar.] The CD begins to wrap up along with the film, with an "homage" to Reitman's previous ensemble film, Animal House, with "Freeze Frames", showing the future of many of the platoon and other characters in the future. The "Stripes March" is punctuated with little musical segues, including an almost blatant Magnificent Seven and The Great Escape music pulls (hey, wait, he wrote those, so he's allowed to do it, right?!).

Overall, the CD is a satisfying experience, finally getting a long in demand score from Elmer Bernstein's great and illustrious career, during one of his high points, and for us "thirty-somethings", from our favorite period of movie memories. If we can only nudge Varese into giving Elmer another tribute of his work during this period and deliver us Airplane! or Ghostbusters, fans of his work and film score lovers alike will enjoy.

The bonus track on the CD contains Bernstein's original music for the trailer to the film. It's not particularly noteworthy, just that it's an odd addition to this package. Additionally, the recording sounds very tight and constrained - much as it has on other Bernstein LPs. I'm not sure if it was due to being before the advent of mixing for multi-channel sound (I mean more than just a two to four track mix), or that the recording engineer during the eighties just liked all of Bernstein's work to sound compressed (you hear this on Airplane and Heavy Metal as well) like you're hearing it through a tin horn. It's nice hearing the music without the pops and scratches found on the LPs, but I think that if we're done recording all of Goldsmith's and Herrmann's back catalog, Elmer's late 1970's and early 1980's work could do with a spate of re-recordings. Find Joel McNeely, get him on a plane to Scotland... and "That's the fact Jack!"