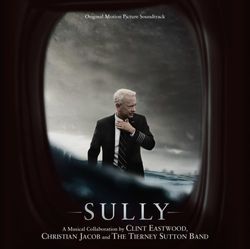 * Not included in the film.

Direted by Clint Eastwood, Sully tells the true story of US Airways Flight 1549 and pilots Captain "Sully" Sullenberger (Tom Hanks) and First Officer Jeffrey Skiles (Aaron Eckhart), who glide their disabled plane onto the frigid waters of the Hudson River, saving the lives of all 155 aboard.

The soundtrack was written in collaboration with Clint Eastwood, Christian Jacob, and The Tierney Sutton Band. The album contains nineteen tracks including seven which were not featured in the film. Tierney Sutton, Grammy Award nominated American jazz singer, delivered an amazing performance as the lead female vocal in many of the tracks. Alongside Christian Jacob (pianist in the Tierney Sutton Band), Sutton organized a beautiful score infused with a myriad of unique jazz rhythms, progressions, and harmonies. All in all, this created a wonderfully transparent score.

'The Mind Theme,' is one of the first motifs heard in the film. First heard in "Sully Wakes Up," this motif is a repetitive four note ostinato which can easily be recognized as a common film color. I've categorized this repetitive pattern as the thought process of Sully. This theme provides a wonderful churning of thoughts in which Sully is contemplating after the forced landing.

Uniquely, the film is not a play-by-play of events, but instead focuses on Sully's and the crew's recovery back to reality and the repercussions they must face. This motif is a perfect device for helping elude to the inner thoughts, fears, and controversies Sully constantly argues in his head.

'The Mind Theme' also helps project a major theme in the film: the 'Human Factor.' The motif grinds along monotonously breathing and thinking, similar to that of a human mind. It is accompanied by a diverse harmony played through soothing jazz chords, pulses, and melodies. This contrast clearly shows a division between Sully's constant thoughts and his environment, being the city, boardroom, or plane as it was falling from the sky.

The soundtrack album is tasteful and simple—only providing music for moments which allow it to be noticed. One of the first scenes which contain music is when we see Sully running through the streets of New York. Here is where we are introduced to "Sully's Theme" (found in the track with the same name).

'Sully's Theme' is typically heard though a woman's voice accompanied with either a piano or string section. The theme is a great display of stress and release (or breathing) within music. The melodic contour of the line breathes in and out which makes the melody convey human elements. The conscious choice to use a voice for the main melodic instrument symbolizes the idea of unity or coming together as one, a key theme in the film.

Many scenes in the film focus on the community of New York jointly working to help rescue and care for the people on the flight. This symbolic theme of unity is very clear in the track "Hudson View" and "The Rescue." Within these tracks 'Sully's Theme' is played both in its original form and in augmentation of the original. These moments are the highest of quality in the score.

Specifically, the rescue scene demonstrates wonderful intent and knowledge on how to make a scene more impactful and meaningful with the use of music. The decision to use only voice (in contrast to a string section) creates a very intimate and emotionally intense scene. More common than not, today's film music is just a background noise roaming without a true connection to the scene it is underscoring. In contrast, Sully embraces the musical gesture in a magnificent way allowing the audience to see and hear the dialogue between the musical melody and what's happening on screen.

Overall, however, the score lacks key elements which bring a great soundtrack to life. The score may function better as a solo album unrelated to the film. Many moments were lacking luster and appeared to be musically unimportant, specifically the interactions between Sully and his wife. A good film score is not represented solely by its 'big' moments, but more so by subdue, delicate ones. Despite strong moments being present throughout, there was lack of honest connection to the characters and the film itself.