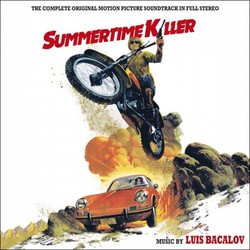 The score, written by Academy Award-winning composer Luis Bacalov in 1973, was only released in Japan in a deluxe but brief 25-minutes LP. In 1995 one most extensive edition of the score was issued in Italy by the label Point Records, in a CD now out-of-print and, for many years, hard-to-find. However, the previously unreleased tracks in the Point edition were presented in a non-too rational suite version.

Now, this thrilling score in a newly remastered, restored and most complete and definitive edition.