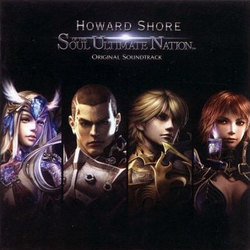 SUN: Soul of the Ultimate Nation

Performed by
National Philharmonic of Russia and Academy of Choral Arts

SUN: Soul of the Ultimate Nation, both in the look of the game as well as in the music, tries very hard to be The Lord of the Rings, or at least set in a middle-Earth-like world. While it is nothing compared to Lord of the Rings, it is still Howard Shore. Shore\'s style speaks for itself and he brings his powerful orchestral approach to this video game and delivers the sound that the producers of the game no doubt wanted. However, what made Lord of the Rings such an amazing score (viewing the trilogy as a whole) are the nearly overwhelming use of thematic material for almost every scene in the films. Some are instantly recognizable while others are so subtle many listeners are still trying to find them all! SUN has a few themes, but the score almost sounds empty when one is given Shore\'s Lord of the Rings sound without the thematic material. This was a long way of explaining that the album is good, but does not come close to comparing to The Lord of the Rings.

Shore does succeed, however, is distancing himself from a copy of Lord of the Rings. Different instruments are used in certain parts, such as the solo oboe in "A Prelude to Revolt" and a flute-like instrument in "A Poem for Nemesis". Still topnotch is his use of brass and choir, as in "Empire Geist" and "Sanctuary of Ether", respectively, and "March to Victory" for both. One of the main themes is introduced on solo trumpet in "Tides of Hope". Bits of this theme are used widely throughout the score, primarily for the action-based scenes ("Helron\'s Castle", "Hymn of the Battlefields", and March to Victory"). The latter uses some of the rapid brass performances like in "The Fields of Pelennor" from The Return of the King. Once the album gets under way, the sound of each cue does not vary much from the mighty orchestral action music except for a few darker cues such as "Requiem for the Dead" and "Graveyard of Aiort".

The album ends with a nearly 8-minute cue, "Menace of the Army Wings", which opens with pounding percussion underneath a haunting female choir. The low brass kicks in with the full choir as this cue opens out into the full power of what we experienced in The Return of the King. This cue pounds to a close, unlike The Lord of the Rings, which ended quite slowly and on a quiet note. Again, fans of The Lord of the Rings action music (specifically the second half of The Return of the King) will like this album. While I find it disappointing that a video game would attempt to replicate the film trilogy without actually being affiliated, I think Howard Shore did his best to both provide the producers with the sound they wanted and also distance himself from the sound of The Lord of the Rings. But again, it is still Shore, so there are obvious similarities. Generally, however, this is a solid video game score and it is nicely represented on the album.