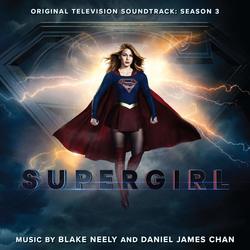 La-La Land Records, Warner Bros., DC and WaterTower Music present the original score from Season Three of the hit television series Supergirl, starring Melissa Benoist, Mechad Brooks and Chyler Leigh. Acclaimed composers Blake Neely and Daniel James Chan keep the third season of this remarkable series flying high with an emotional score that lends thrilling support to this iconic character and her amazing exploits. Neely has selected and assembled Season Three's most impressive musical highlights into a riveting program—Dramatic, heartfelt and adventurous, the music of Supergirl - Season 3 is a listen every fan will treasure! Produced by Blake Neely and mastered by Stephen Marsh, this is a special limited edition CD release of 3000 units. The high-flying art design is by Dan Goldwasser.