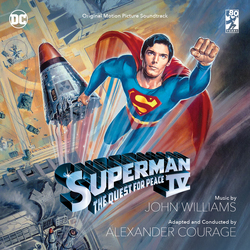 Superman IV: The Quest for Peace

La-La Land Records, Warner Bros. Entertainment, Water Tower Music and DC present the first solo CD release of the original motion picture score to the 1987 feature film, Superman IV: The Quest for Peace, starring Christopher Reeve, Gene Hackman and Jackie Cooper, and directed by Sidney J. Furie. Superman maestro John Williams' spellbinding music, adapted and conducted by Alexander Courage, sends the Man of Steel soaring high, with a stupendous orchestral score that proves to be a wondrous way to celebrate Superman's 80th Anniversary! Previously only available as part of a now out-of-print 8-CD set from Film Score Monthly, this release makes this notable work available once again for a new generation of comic book and superhero movie fans. Produced by Mike Matessino and Lukas Kendall, mixed and edited by Matessino, and mastered by Doug Schwartz, this release features the epic film score (which was recorded for a much longer version of the film) spread across two CDs, with alternate cues following. Disc 2 concludes with all of the songs and source material that were recorded for the project by Paul Fishman. The in-depth liner notes by Mike Matessino, Lukas Kendall and Jeff Eldridge have been sourced from the box set release and pay tribute to the great talent of Alexander Courage, best known as the composer of the theme to Star Trek. The heroic art design is by Jim Titus. This is a limited edition of 3000 units.