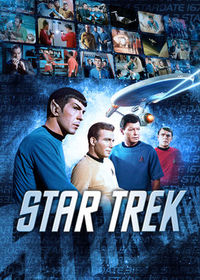 The fictional future earnestly on display in the original television series "Star Trek" finally meets the future of home television viewing in the form of high-definition Blu-ray.  With revamped and updated special effects, the oldest series of the "Star Trek" franchise suddenly finds itself back in the spotlight, leading the charge with bravado and daring.  Combined with the release of the latest feature film, the original incarnation can once more showcase the best that the Trek universe and its characters have to offer.

The inaugural season drops the unsuspecting viewer into this speculative vision of our future with no guide or handholding.  The first half of this season is very effective in portraying deep space exploration as a lonely, dangerous mission, populated by deserted, dead planets, isolated and unbalanced inhabitants of remote settlements and threats from strange beings incomprehensible to the human mind.  During such adventures as "Where No Man Has Gone Before", "The Naked Time" and "The Corbormite Manuever" the audience is set right amongst a captain and crew who we know very little about, trusting them to make smart decisions while trapped in the dark corners of space with seemingly no lifeline to any home with which we would be familiar.

As the season progresses, the characters earn our trust, respect and affection, especially through episodes with a more revealing, personal focus, such as "The Menagerie", "Court Martial" and "This City On The Edge of Forever".  And in both "Tomorrow Is Yesterday" and the aforementioned "The City On The Edge of Forever" we find our first of several modern day surrogates in Air Force pilot Captain Christopher and Edith Keeler respectively, who can be introduced and guided into the inspiring, advanced world that Kirk, Spock and the others inhabit.  By the close of the first season, the viewer can feel fully at home on the Enterprise, comfortable with the crew and eagerly anticipate sharing further adventures under the bold command of Captain James T. Kirk.

Previously released on DVD and then HD-DVD, the first season of Star Trek now makes it to Blu-ray.  Like the HD-DVD, this includes the newly restored high-definition image, with the new visual effects that were created for the 40th Anniversary broadcasts of the show. The episodes are presented in air-date order, not production order, which means that the first few episodes are all over the place, and when "Where No Man Has Gone Before" shows up, it feels out of place since the sets, costumes, and even make-up and some cast members suddenly change a bit.

Restored from the original camera negative, the image of these episodes is great.  The colors are deeply saturated and truly "pop", and given the shows penchant for excessive use of colored gel lights, it looks really vivid.  Detail in the HD image is also crisp.  A little too crisp  - you can see things that 1966 television sets were clearly going to obscure.  The cheaply made sets, the harried look of the costumes, the sloppiness of some of the make-up - it\'s all visible now.  Even William Shatner, who had looked youthful as Captain Kirk in the original series, now looks a little closer to his 35-years of age.  Basically, it\'s a testament to the ability to see classic television that had been shot on film in television, but also serves as a cautionary tale for shows that clearly had never been intended to be seen with such clarity.  Similarly, the visual effects - which are presented in both the original version (upscaled and unrestored) and new CGI effects (in HD) - look quite good.  Unfortunately, some of the new effects suffer from the limited budget that CBS Digital had to work with, and the CGI looks like a video game at times.  Other times, it works exceptionally well. It\'s a hodgepodge, really.  But a nice feature of the Blu-ray set is that you can switch between the original visual effects, and the new effects simply by taking advantage of the "alternate angle" button on your remote. Snazzy!

Audio for the set is presented in new DTS-HD Master Audio 7.1 home theater mixes, which sound pretty good! Most of the episodes are rather front-heavy, and only the occasional use of sound effects (usually the Enterprise flying past the camera) takes advantage of the rears.  The music was also re-recorded for the main titles, and the new recording is quite clean and good - though it\'s not the original performance.  Luckily for purists, the original mono tracks are included, as well as French and Spanish.

Most of the special features for the disc are carried over from the DVD release of the season, and are presented in standard definition.  But there are some new HD extras as well!  "Spacelift: Transporting Trek into the 21st Century" (Disc 1, HD, 20-minutes) is a solid featurette that looks at the restoration process for the series, and how they went about handling some of the visual effects.  They also look at the scoring session for the re-recording of the main title, so that\'s a great segment for film score fans.  "Reflections on Spock" (Disc 3, SD, 12-minutes) is a short featurette with Leonard Nimoy discussing his thoughts about the seminal role that he created, and which he will forever be associated with.  "Life Beyond Trek: William Shatner" (Disc 4, SD, 10.5-minutes) features Shatner talking about what he does with his life after "Star Trek" - which seems to consist of a lot of horseback riding.

"To Boldly Go... Season One" (Disc 5, SD, 19-minutes) is a look at the first season of the show, with archival interviews, "new" interviews, and "Birth of a Timeless Legacy" (Disc 5, SD, 24-minutes) uses more interviews - including archival ones of creator Gene Rodenberry - to talk about the origins of the show, the challenges of filming it in the 1960s, and the lasting effects it had on pop culture and television.  "Sci-Fi Visionaries" (Disc 6, SD, 16.5-minutes) focuses on the writers of the show, and the challenges they faced with gaining acceptance in the current sci-fi community.  "Interactive Enterprise Inspection" (HD) is a neat little way to explore the 3D model of the Enterprise, and get technical information about what each of the various parts of the ship do.  It\'s a little geeky, but it\'s neat to be able to travel the multiple combinations of pre-rendered paths around the ship - oh, and you get to fire photon torpedoes!

"Billy Blackburn\'s Treasure Chest: Rare Home Movies and Special Memories" (Disc 7,  HD, 13.5-minutes) features a look at the rare behind-the-scenes footage shot by cast member Billy Blackburn, as well as his fondest memories of working on the show. "Kiss\'n\'Tell: Romance in the 23rd Century" (Disc 7, SD, 8.5-minutes) features Shatner and some of the show\'s writers talking about the myriad of romantic relationships that appear in the show, and how they evolved into the feature films.  All of the discs contain standard definition television trailers for the episodes.

One special extra found on four of the episodes ("Where No Man Has Gone Before", "Balance of Terror", "Space Seed", "Errand of Mercy") is something called "Starfleet Access".  This provides pop-up trivia, by Trek experts Michael and Denise Okuda, as well as pop-up video with them, writers, crew members, and more people, talking about the various bits in these particular episodes.  They also use it as a nice way to show how the new visual effects enhanced the episode, with before/after comparisons.  Finally, on the last disc is a BD-Live area, where you can access a bunch of text data about the cast, characters, and more.  There is also a short photo gallery, and currently three additional featurettes (in both SD and HD) for download to your Blu-ray player.

With exceptional video and audio quality - as well as the ability to watch the original archival versions of the episodes as they had aired - Star Trek: The Original Series - Season One is a phenomenal package that will make any Star Trek fan weak in the knees.  There are some missing extras (a Starfleet Access on "The Galileo Seven" and "Red Shirt Diaries" featurettes were on the HD-DVD release, and there were Okuda text commentaries on the DVD), but with higher quality video and audio, this is still about as good as it gets.  Definitely a must-have for any true "Star Trek" fan.