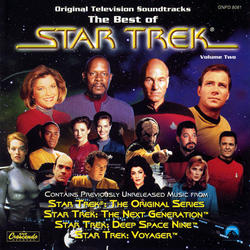 GNP Crescendo's latest offering from Paramount's Star Trek franchise is Volume 2 of "The Best of Star Trek". Not to be confused with just Volume 2 of "Star Trek" which contains music from just the original series. This compilation features music from the four live-action television series: Star Trek (1966-1969), The Next Generation (1987-1994), Deep Space 9 (1992-1999), and Voyager (1995-2001). My best guess is that this is a sequel to the 1996 30th Anniversary collection. The four main title tracks are nearly identical to the ones from the previous album, and are included for purists only.

The rest of the tracks are a vast improvement from the selections offered on the 30th Anniversary collection. In the Original series collection, Neil Norman selects three episodes ("The Corbomite Maneuver", "Balance of Terror", and "What Are Little Girls Made Of?") which set the bar for the rest of the series. Fred Steiner's work here is outstanding. Some of this music went on to be featured prominently as theme cues throughout the rest of the series' run. It is no wonder why; each suite from the episode perfectly captures the emotions from their respective scenes. The tension against the Romulans in "Balance of Terror", the suspense of "The Corbomite Maneuver", and the "Isn't that the guy from the Addams Family" feeling from "What Are Little Girls Made Of?" There is also a nice interlude from the chapel scene of "Balance of Terror" and a completely forgettable lounge/need-to-fill-disc-space version of the opening theme.

The strength of the Original Series selections did not bode well for the modern Trek era music, which is unfortunate. The themes presented from DS9 and The Next Generation represent some of the finest work of Dennis McCarthy, but at the same time underscores the fact that a lot of the music from these two shows is interchangeable and ultimately unmemorable. The selections offered on the 30th Anniversary collection from "The Inner Light" (TNG) and "The Visitor" (DS9) were truly pinnacles in the respective series musical selections and the selections here from "Way of the Warrior" (DS9) and "All Good Things" (TNG) offered here fall way short. However, all is not lost for" Deep Space Nine", Nana Visitor provides an excellent cover of the song "Fever" from the episode "His Way" that is an instant classic. The vastly superior "Voyager" suite from the camp classic episode "Bride of Chaotica" displays the uniqueness and fun that is missing from its modern Trek siblings. You can practically hear Kate Mulgrew smirking as she has a field day with the episode.

With the exception of the repetition of the main title themes, it is a good complement to the 30th Anniversary Collection. Don't expect much from the linear notes and track listings. Once again GNP Crescendo has goofed and put the incorrect track numbers on the insert. The booklet and jewel case covers are sub-par, and don't appear to have been a top priority for this album. All in all, though, this is a good CD to pick up if you like Star Trek music.