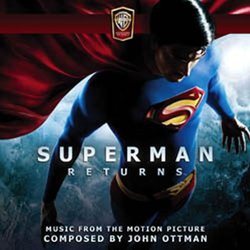 Composer Ottman pays homage to John William's iconic Superman theme, incorporating Williams' music within his own thrilling, emotionally-charged orchestral score to this re-imagining of the Man Of Steel legend.

Expanded over its previous release by more than 70 minutes, this 2-CD presentation of Superman Returns finally gives this wonderful score its proper place within the Superman musical legacy —and it arrives just in time to celebrate Superman's 75th anniversary!