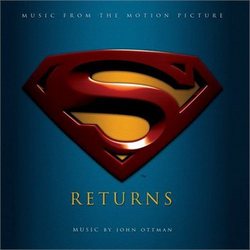 I knew John Ottman had succeeded at creating something both special and reverential toward the original material forty-five seconds into the second track, "Memories". All of a sudden, a powerful timpani hit helps lift the violin section and its accompanying choir and we hear a resplendent rendition of the Kent Family Theme as young Clark leaps over the sunny fields of his hometown. I had to double-check the composer\'s name. What I was hearing had nothing to do with tormented, minor mode harmonies or quirky musical mischief; it was hopeful, gleaming, and decidedly non-Ottman-esque. It wasn\'t a simplistic cut-and-paste job from Williams\' masterful score; rather, it showed an understanding of the source material and a yearning to build on it and move on with it, to modernize it and adapt it in such a way as to make it sound fresh and fantastical again.

Film music composers, like writers and actors, have the unfortunate tendency of being typecast in a certain genre once they succeed in it, thus attracting a spotlight that is reluctant to move away from the success and forward along with the composer. Before Superman Returns, I\'m sure Ottman could count on the fingers of one hand the number of times he\'d had to rely on the major mode in his career. Here, because of his connection to director Bryan Singer, he is allowed to stun us with a style we didn\'t know he possessed. His soundtrack for the Man of Steel has none of the brashness and mickey-mousy action music of Fantastic Four; it is well grounded and almost grandiose in scope. He integrates his own themes for the franchise flawlessly along with John Williams\' time-honored melodic champs, coming up with a recurrent theme for Lex Luthor and a sorrowful melody for Superman\'s internal turmoil.

A good example of Ottman\'s approach is "Not Like the Train Set" which opens with an evil and slightly maniacal variation on Lex Luthor\'s Theme for violins, flutes, and muted trumpets. The theme succeeds at the one thing that was egregiously wrong with the original: it actually gives weight and importance to the villain. Williams\' "March of the Villains" was a fun and quirky theme for Otis but it severely undermined whatever clout the script allowed Gene Hackman to muster for his character of Lex Luthor. Ottman\'s theme here is not particularly amazing or memorable, but provides the necessary musical muscle to back Spacey\'s character\'s devious intellect. The middle portion of the cue offers us a combination of ethereal major mode progressions for piccolos and trumpets and driving suspense cues making good use of Luthor\'s Theme. The piece is allowed to finish with the Fanfare Ostinato which introduces the full Fanfare for trombones. The Superman March is never stated on the soundtrack apart from the "Main Titles" since its overly victorious call would sound out of place in a darker take on the Man of Steel\'s journey; the Fanfare becomes the hero\'s calling card instead and its trademark ostinato serves to introduce the super-feats to come.

John Ottman continues his particular use of the choir in this score, although his experiments do not extend as far as those heard in Fantastic Four. "Saving the World" creates an otherworldly sound for the choir by having it perform as an angry mob, while "Not Like the Train Set" allows the singers to ah-ah in concert with Luthor\'s Theme. It is in its more traditional moments though that the choir really shines, especially when combined to the violins to wring an emotional performance of Superman\'s Personal Theme out of its singers, such as in "Little Secrets" and "You\'re Not One of Them". The melody is built to go down for one note before steadily climbing up and is more of a motif or short theme, although a second phrase can be heard occasionally. It is a powerful melodic fragment, expressing at once melancholy and hope, that gives a human dimension to the character which, in the first movie, had been eschewed.

The Fanfare and accompanying Ostinato are well integrated into Ottman\'s new musical structures and a few other familiar themes rear their head from time to time, including the Kent Family Theme ("Memories" and "I Wanted You to Know") and the Krypton Theme ("How Could You Leave Us?" and "Tell Me Everything"). The Love Theme is heard a few times, always firmly rooted in the Romantic mode, but is usually left hanging, unresolved. Its strongest performance is heard at the end of the "Reprise" segment from "Reprise/Fly Away" where it is pushed to its highest note in a grand, sentimental form before being quietly resolved. Other themes from the Superman canon seem to have been avoided. The Superman March is absent; so is the March of the Villains. The Kryptonite/Legacy motif is never heard aside from a faint hint during the latter half of "Memories" in a cue that pays homage to the original discovery of the memory crystal in the barn without ever quoting from the original piece. The Train Theme from the original is likewise "reinvented" over a classical ostinato in the same cue.

John Ottman\'s score to Superman Returns is to Williams\' original soundtrack what Brandon Routh\'s Superman is to Christopher Reeve\'s: the persona is the same but the outer envelope is a bit different. Fans looking for a rehash of Williams\' score on this album will be disappointed as the balance tilts firmly in favor of Ottman\'s original material. Cues from Returns which were faithful reprises of the original score (such as the driving rendition of the Fanfare heard at the end of "The Fortress of Solitude" which is modified to herald Superman\'s recognized return) did not make the cut. Still, the vast majority of the complete score\'s strongest pieces is present here and, while there seems to be an overabundance of quieter cues based on the Personal Theme, one can hardly blame the composer for showcasing the calling card of his score. The mixing by Casey Stone is flawless: the recording is crystal clear and each orchestral and choral section can be distinctly heard at all times. Ottman\'s at times grieving, at times heroic stylistics are certainly door-openers for future projects to come. I would not be surprised to find his name attached to movies in the vein of World Trade Center, demanding poignant string elegies and powerful choral moments to celebrate the lives and deaths of the heroes among us. For now, the composer has crafted a spectacular and cohesive score that is at the same time new and respectful of the 1978 score. Its action music is focused and interesting; its heroic flourishes are grin-inducing; and its tender and painful moments constitute some of the best and most imposing material of his young career. There will be both cheers and hollers aimed at this one: it is the unfortunate consequence of stepping on hallowed ground. For my part, Ottman has achieved what he set out to do: to make a man fly and make us care.