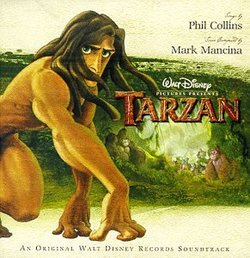 Walt Disney recently released its latest animated feature, Tarzan. Filled with the groundbreaking animation technology, this film not only has a great story and a great cast, but also great songs and a great score. Songwriter Phil Collins and composer Mark Mancina collaborated to bring the soundtrack to Tarzan to life.

Released on Walt Disney Records, the soundtrack contains five songs by Phil Collins and five tracks of score by Mark Mancina. While Collins wrote the songs, Mancina worked with him and orchestrated them so that there would be a seamless flow between the songs and the score. Additionally Phil Collins performed drums in several score cues, which helped seal the musical continuity in the film.

The opening sequence, the song "Two Worlds, One Family", is an upbeat song that draws the audience into the story while at the same time progressing the story line. Orchestrated by Mancina, this song also contains some dramatic orchestral score elements as Tarzan's family and the Gorilla family encounter tragedy. One of the other major songs of the film, You'll Be In My Heart, is a heartwarming song which symbolizes the love between Tarzan and his primate adopted mother.

The score cues, while short in length, do provide a reasonable taste of how the score works in the film. It would be unfair to compare the score to The Lion King, but there are some similarities between the two scores in that both contained tribal African rhythms and similar instrumentation. There is one major action cue provided ("The Gorillas"), and it is both enjoyable and exciting to listen to, as it contains Mancina's trademark musical style which has been present in such films as Speed and Bad Boys. It is also evident that Mancina drew on his experience from working on The Lion King Musical and Return to Paradise for some of the rhythmically sweet cues in the score.

A very bizarre trait of the soundtrack is that it also includes Phil Collins' pop versions of all the songs, including one song with 'Nsync. None of these pop versions of the songs appear in the film itself, but some of them appear in the end credits. While these songs are nice to listen to (no doubt one can hear them constantly on the radio) it would have been nice to fill that space with more of Mancina's score. However, as Mancina himself had pointed out in a recent interview with SoundtrackNet, many score cues had not yet been mixed or recorded when the soundtrack needed to be pressed. To that extent, this is a very it's enjoyable CD although somewhat incomplete. Tarzan was one of the best Disney movies I have seen in recent years (not counting the Pixar films), due to a high caliber of quality on all aspects of production. As such I would highly recommend that you not only see this film, but pick up the soundtrack as well to remember the experience.