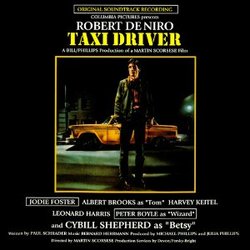 by Dan Goldwasser October 15, 1998
3.5 / 5 Stars
Bernard Herrmann's last film score was for Martin Scorsese's TAXI DRIVER. He died the day after the score was finished being recorded. It is therefore almost a testament to his memory that Arista Records released the complete score to TAXI DRIVER on CD.

Herrmann chose horns and percussion to represent the strength and impression of solidity that Travis Bickle (Robert De Niro) emanates. The majority of the score is dark horns with a jazzy element underscoring it.

In addition to the complete score, a few extras are included: "Diary of a Taxi Driver" contains narration from the film over Herrmann's music. Also, a few tracks which were arranged by Dave Blume are presented, allowing us to hear a jazz interpretation of the themes.

If you are a fan of a calm, dark score, this CD is perfect for you. If you are a Herrmann completionist, then definitely pick it up. But if you are expecting a rousing score (ala VERTIGO), then you might want to pass on this one.