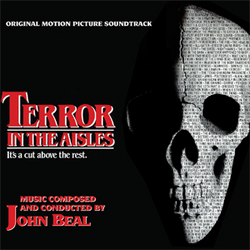 Terror in the Aisles

BUYSOUNDTRAX Records presents Terror in the Aisles, featuring music composed by John Beal for the 1984 horror retrospective directed by Andrew J. Kuehn and hosted by Donald Pleasence (Halloween, Prince of Darkness) and Nancy Allen (Dressed to Kill, Blow Out).

Logistically, it would not make sense to use the existing music for all of the film clips used in the film or you would have a soundtrack of complete chaos, with different music styles colliding with each other and some harsh editing. Director Andrew Kuehn would need a composer who could write music that would support the clips shown in the film and also maintain its own dramatic progression. To resolve this problem, Kuehn turned to composer John Beal, who already had a solid reputation for writing music for movie trailers and would easily be able to switch musical gears in a microsecond and was also intimately familiar with the original scores for many of the clips shown in the film. While some of the score for Terror in the Aisles is electronic, most of the score was recorded with a symphony orchestra at CTS Studios, Wembley in London.