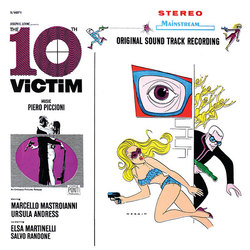 The 10th Victim / That Man in Istanbul

On this CD premiere, Intrada presents two LP programs from the classic Mainstream catalog. Spy films were prevalent during the mid-1960s, and 1965 was a peak year for the genre, ranging from the Oscar-winning spectacle of Thunderball to the gritty suspense of The Ipcress File and The Spy Who Came in From the Cold. In between these classics were the "Eurospy" movies and '65 saw the release of two lively entries in the genre—the cult classic The 10th Victim and the action-packed That Man in Istanbul.

While not technically a spy movie, The 10th Victim's cat-and-mouse story line, European locations and glamorous stars often place it in spy movie retrospectives. In its future, war has been replaced by "The Big Hunt," where volunteers join a legally sanctioned murder game. Its protagonist is a veteran hunter surprised to learn that his new target is a woman. Piero Piccioni's score is dominated by its main theme, which frequently blends cool organ sounds with the vocals of singer Mina. The film's love theme is performed unromantically on an organ, emphasizing the shallowness of the characters and their romance.

That Man in Istanbul is a more traditional "Eurospy" adventure. "That man" is Tony Maecenas, an American rogue who has fled to Istanbul where he runs an underground casino. Investigating the apparent death of a kidnapped nuclear scientist in a plane crash, gorgeous FBI agent Kenny is convinced that Tony is involved. Hunting for the missing scientist, Tony and Kenny encounter a complex web of espionage in the Turkish seaport. The Los Angeles Times' Philip K. Scheuer called the film's score "just corny enough to be noticed," and that "corny" score was the work of Georges Garvarentz. Unlike the European scoring style of 10th Victim, Garvarentz takes the American approach, with his music following the action closely while varying the tone wildly to match the mood of the moment. Garvarentz' music shows the influence of the James Bond scores, with its repetitive motifs, sinister stings and brassy rhythms, but balances the thrills with lighter cues fitting the film's flippant tone.

The two seemingly unrelated soundtracks paired together on this CD have more in common than it may seem. Both were recorded with orchestras in Europe. Both were recorded in 1965 for pictures released respectively in December and August of that year. Both are receiving their U.S. premieres on CD, with That Man in Istanbul receiving its first CD release anywhere. Both were first available in the U.S. on the Mainstream label and, perhaps not coincidentally, both were assigned sequential part numbers: S/6071 and S/6072. And finally, both have brisk, flavorful scores. One nice bonus on Istanbul was the presence on the master tape of an additional track previously unreleased, featuring a "finale" version of the title song with a stronger finish befitting the conclusion of this bright spy/adventure score.