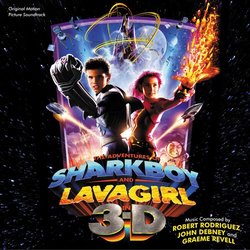 The Adventures of SharkBoy and LavaGirl in 3D

Review: Adventures of SharkBoy and LavaGirl in 3D, The

The credits for soundtracks to Robert Rodriguez' films often read like a compilation of various artists, while in fact he tends to just bring in multiple composers for his projects. In the case of Sin City, this approach worked extremely well, as the director hired John Debney and Graeme Revell to score two of the three story lines while he himself wrote the music for the third. This gave the three stories each a slightly different sound. For his latest children's picture, The Adventures of SharkBoy and LavaGirl in 3D, the same composers return, to a lesser degree of success.

The music is good, but the score approaches the Spy Kids mentality of having too many composers. Two other names are credited with cues. Revell's contribution is relatively small, being generally limited to the character of Mr. Electric and is, I guess appropriately, more electronic than the other cues. The general feel of the music is fantastical and dreamy, giving life to the colorful, 3D, CGI images on the screen. Rodriguez' theme is good, a powerful motif that is usually performed by the brass, but is used somewhat sparingly. A large amount of the music actually sounds like midi and one cue, "LavaGirl's Sacrifice" uses synthesized percussion that sounds like some of Zimmer's action music from the early 1990's.

Three songs are also included on the album, "Dream Dream Dream", "The LaLa's" and "SharkBoy and LavaGirl" none of which add to the score. Debney's portions, especially those that utilize Rodriguez' theme such as "The Shark Boy", are the better parts of the score and sound more orchestrated than the rest. I hope Rodriguez hires the same composing team for the sequel to Sin City, but for his other works, he should either compose the music himself or just hire one composer.