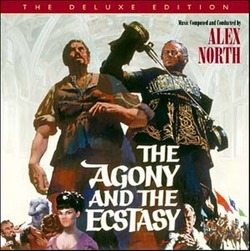 The Agony and the Ecstasy: The Deluxe Edition

The Agony and the Ecstasy sent Alex North into an altogether different world and he produced a stirringly emotional and thrilling score that ranks with the all-time greats. Joining with Spartacus and Cleopatra, The Agony and the Ecstasy concluded the composer's trio of epics in grand style, ensuring that North would be considered one of the masters of the genre forever. It is a designation that not only lasts until today but North's scores seem on an even higher and more unattainable plane when viewed from a distance of 50 years.

Of considerable concern to the filmmakers and studio was that audiences might need an introduction to, or at the very least a refresher course in, the work and significance of Michelangelo. Further, the notion that the artist of what is now one of the most famous of all paintings was, in fact, an artist who never considered himself a painter at all, needed to be emphasized. To do this, after production of The Agony and the Ecstasy had already had been completed, the studio decided to produce a documentary prologue to be shown before the film. Titled The Artist Who Did Not Want to Paint, the twelve and a half minute documentary was beautifully photographed, narrated by voice actor Marvin Miller and scored by the not-yet-legendary Jerry Goldsmith.

In his score for this moving study of genius, Jerry Goldsmith produced an absolutely stirring work. In fact, it remained one of the composer's personal favorites through to the very end of his career. Though scored for full symphony orchestra, the orchestra actually speaks only occasionally. Despite the grandeur of the locations and works of art shown, Goldsmith's composition is actually one of the most fragile and delicate he ever wrote. The Prologue, twelve and a half minutes in length, was composed in five movements (Rome, Florence, The Crucifix, The Stone Giants, The Agony of Creation), played without a break. As stunning a work as it is, the piece was not included on the original soundtrack album of Alex North's score. Finally, and for the first time, it is here reunited with the score it was written to precede.

Alex North and Jerry Goldsmith were lifelong friends. Given the friendship and mutual respect the two composers shared, it seems particularly fitting and poignant finally to unite such thrilling examples of some of each man's finest work.