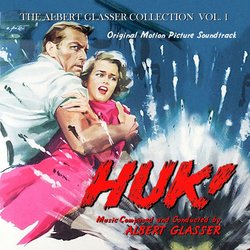 Dragon's Domain Records, to be distributed through buysoundtrax.com, presents The Albert Glasser Collection, Volume 1, featuring music composed and conducted by Albert Glasser for Huk! and Tokyo File 212, two films from his extensive filmography.

Huk! is a 1956 United Artists action film directed by John Barnwell, written by Stirling Silliphant, and starring George Montgomery, Mona Freeman, John Baer, James Bell, Teddy Benavides and Mario Barri. Set and filmed in the Philippines, Huk! follows American planter Greg Dickson (Montgomery) who returns to the Philippines in 1951 intending to sell his dead father's plantation. When he arrives in the country, he finds that it has been overrun by Huk guerrillas, including the rebel leader who killed his father. With the aid of buddy Bart (Baer) and Bart's wife, Cindy (Freeman), Greg helps defend the local people from the rebels.

Tokyo File 212 is a noirish detective adventure set during the Korean War but taking place in Japan. The RKO picture was directed by Dorrell & Stuart E. McGowan and starred Robert Peyton (aka Lee Frederick), Florence Marly, Katsuhiko Haida, and Reiko Otani. Released in 1951, Tokyo File 212 is about a Communist spy ring in Tokyo hard at work trying to sabotage the American war effort using kidnapping, murder, and a disturbed former kamikaze pilot. A U.S. secret agent (Peyton), posing as a reporter, is dispatched to Tokyo to put a stop to these nefarious activities, while befriending a shady woman (Marly).

Dragon's Domain Records presents The Albert Glasser Collection, Volume 1, featuring music composed and conducted by Albert Glasser for Huk! and Tokyo File 212 for the first time on compact disc. The music has been mastered by James Nelson at Digital Outland and the liner notes have been written by noted author Randall Larson.