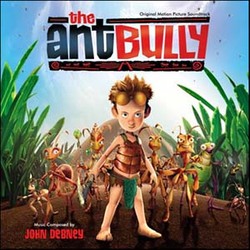 I have to admit that the score to The Ant Bully was slightly confusing at first, and it is my own fault. The majority of the album consists of short, comedic cues that each take on different styles as Debney matches beats to events on the screen. I was at the point of getting bored with it when the last track began to play and I immediately changed my mind. The last cue, which I will discuss later, brings in a major theme that I had not noticed before. This is because something went wrong when I was importing the CD onto my computer and the first track was missing. This is the cue that introduces the main theme in the style of the finale track. Once I re-imported the CD, everything made sense. I felt the same way with John Powell\'s Evolution score; I didn\'t connect with it until the theme was performed in full toward the end - and then I could hear it everywhere.

John Debney\'s prolific career is dominated by comedies and animated films, despite infrequent forays into other genres that result in masterpieces such as The Passion of The Christ and Cutthroat Island (though some might argue that the latter film was a comedy). In the full orchestral sound of Harry Gregson-Williams and John Powell\'s Antz from 1998, Debney\'s The Ant Bully is an expected high quality score with a lot of energetic writing for comedic and action sequences, in the style of his work for Zathura from last year. For The Ant Bully, Debney truly shows off his talent at melding together a number of clichéd sounds for particular cinematic elements into a new and unique musical sound.

"Frog Attack" is an example of the playful style of scoring and then breaks into an electronics-infused cue like Antz. Some of the early action cues have a John Williams sound along the lines of action cues in Star Wars, such as "Destroyer" and "Wasp Attack". "Mommo Awakens" features a carousel-style sound while "Honeydew Feast" has a bouncy feel. "Homecoming" features a jazz sound with the saxophone and the major action cue, "Assault on Stan" has bits of this style interspersed with the orchestral action. "Exterminator Arrives" steps up musical action that continues into "Launching the Attack" and "Attack on Stan". All together, Debney created a highly varied album while maintaining a consistent sound through orchestrational elements and a very subtle use of the main theme.

After hearing "Bullies and Sweet Rock", I was able to go back to the rest of the album (and eventually the first track) and pick out the theme. "Parade of Ants" presents the theme in full backed by light, moving percussion. Following this, we only get subtle hints at the theme in cues like "Team Competition" and "Zac and Lucas". Later on in the score, the theme becomes a bit more prominent with a soaring action variation in "Hang Gliding" and its only other full statement in "Lucas Gets Named". Both "Parade of the Ants" and "Bullies and Sweet Rock" feature the theme performed by the brass and upper register woodwinds at once giving it a unique sound. The finale cue begins with some Antz-like music before segueing into the full theme, again back by the light percussion. Here, the theme is expanded into a full suite and Debney uses a bold counter melody on the horns to flesh out the theme in a way he has not done to this extent since White Fang 2. There are a number of cues that are general background music, but the last cue alone makes the album worth checking out, especially for fans who enjoy finding small statements of themes interspersed throughout a score (I did not mention all of them).