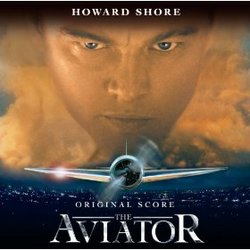 Performed by
The Flemish Radio Orchestra

Martin Scorsese's latest film, The Aviator is a bio-pic which explores a segment of eccentric filmmaker / businessman / pilot / hypochondriac Howard Hughes' life. Beginning with the shooting of the legendarily expensive and lengthy Hell's Angels, and ending with the unexpected flight of the "Spruce Goose", the film explores Hughes' obsession with improving air travel, from revolutionizing airplane design, to buying TWA, to his famous battle in the U.S. Senate against the CAB bill. All the while, his fear of germs and fixation of hygiene is growing - to the point of a nervous breakdown. While Leonardo DiCaprio's portrayal of Hughes is admirable, and shows off his acting chops, he still feels a bit young for the role. However, the true gem in this film is Cate Blanchett's role as Katherine Hepburn. Absolutely stunning. As is expected for most modern Scorsese films, the use of source songs is prevalent, and the use of score is sparse, yet effective. Howard Shore provides music for the dark undercurrent of the film, while also triumphantly heralding Hughes' achievements.

The score album, released on Decca Records, starts with heavily classical-sounding fugue, "Icarus". It sets a tone of excitement as it builds throughout the piece, and evokes the feeling of flight as the various instruments play off each other. I don't recall this piece being used fully in the film, but it was certainly excerpted. The first time we hear the main theme for The Aviator is in a cello line buried in "There Is No Great Genius Without Some Form of Madness". This dark string piece ends with a few repeated notes, a rhythmic pattern that we will become very familiar with by the end of the album. The closest we get to straight-up drama is in a cue like "Muirfield", which hints at the main theme, while only playing minor chord changes. The first time we really get to hear the theme is in "H-1 Racer Plane", a track that builds steadily, starting with strings, and then after a flourish, the brass comes it, along with the castanets and pounding percussion. The roaming woodwinds, and punctuated brass hits are very reminiscent of Shore's powerful "Isengard Unleashed" from The Lord of the Rings: The Two Towers. It's a great cue that gets the blood pumping, and is one of the more triumphant cues on the album.

As Hughes begins his long descent into madness, cues like "Quarantine" and "7000 Romaine" show up, lending a much darker tone as Shore takes advantage of the lower register of the scale. In the latter cue, Spanish guitar adds some Southern California flavor to the madness. "Hollywood 1927" is also pretty dark, starting off with the main theme from Hughes' Hell's Angels (written by Adolph Tandler), and proceeding to devolve very quickly into a maddening conglomeration of dissonant strings, which is also heard in "Screening Room". "Germ Free Zone" isn't as dark, but it's a bit more free-form, with a slight jazz edge to it. "American's Aviation Hero" is a sweeping rendition of the main theme, which delves into a piano solo version, and back into orchestra for the conclusion.

An archival radio broadcast from the "Spruce Goose" taxi test - during which it accidentally flew in the air - is played over music from Tchaikovsky's Symphony No. 6 (which is fitting as Hell's Angels used that piece of music as well) and an excerpt from the jazzy "Stardust" by Hoagy Carmichael and Mitchell Parish. The album comes to a close with "The Way of the Future", a strong reprise of the main theme, with confident brass hits, castanets, and a rather dramatic ending.

The lack of strong thematic material does not preclude this score from achieving a powerful impact. Running 47 minutes long, there is very little (if any) score from the film that feels like it is missing from the album. Scorsese's decision to sparingly use orchestral music, mixed in amidst plenty of source material from the era, along with long periods of silence for the heavily dramatic character scenes, remind us that he knows how to use music in his films expertly. By providing the underscore to Hughes' descent into madness, and providing distinctive and memorable music to accentuate his achievements, Shore has hit another home run and provided us with easily one of the best dramatic scores of the year.