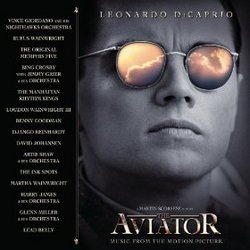 When Hollywood looks back on its rather brief history, the 1920's through the 1940's are revered most fondly. This golden period (from the silent period until the explosion of television) was the zenith of the studio system and the creation of the Hollywood cult of personality. Stars would be created and destroyed through a cycle of hype and gossip that hasn't abated even to this day. Howard Hughes was the maverick genius filmmaker/entrepreneur of a singular vision, and Martin Scorsese's bio-epic The Aviator illustrates his life with energetic vigor. With the release of Howard Shore's score on a separate album, this song album is a rather intriguing.

The story spans the 1920's into the post war 1940's, and included on the CD is a who's who of famous jazz and swing hits of the time, including pieces by Benny Goodman ("Moonglow"), Artie Shaw ("Nightmare"), Harry James ("Back Street Boogie") and Glenn Miller ("Moonlight Serenade"). Two pieces of New Orleans jazz quintet Original Memphis Five are used ("Somebody Stole My Gal" and "Fireworks") as well as Bing Crosby ("Thanks") and folk musician Lead Belly ("Howard Hughes"). Even if you don't know the pieces by name, the tracks will are immediately recognizable as "That song I heard that one time."

While much of the album is dedicated to period music, the rest is a series of new tracks written and performed as if they were of the period. Much work has been put in to recreate the style of the era and the result is quite successful. Now it is pretty easy to tell new tracks from the old ones (just listen to the sound quality), but the spirit is retained from track to track and there is rarely a point where the listener is taken out of period.

The artists most successful at this are Jazz Revivalist Vince Giodano ("Shake that Thing", "Yellow Dust" and "Yellow Dog Blues") and the Manhattan Rhythm Kings ("Happy Feet"). David Johansen puts in his all ("Ain't Cha Glad") but he can't hide his trademark growl. Rufus Wainwright revisits George Gerswhin's " I'll Build a Stairway to Paradise" and he's having a ball performing an old fashion warble. Two other Wainrights also appear on the album (father Loudon and sister Martha) performing tracks of their own ("After You're Gone" and "I'll be Seeing You"). As aside note, Vince Giodano and Rufus Wainwright appear in the movie as band members on stage at the Coconut Grove.

Scorsese has always had an ear for pop culture. As far back as Mean Streets, his films have been driven by the rock and roll pulse of the music listened to by the movie's characters. Scorsese (a life long Jazz and Blues enthusiast) has carefully pulled a library of great music of the time.