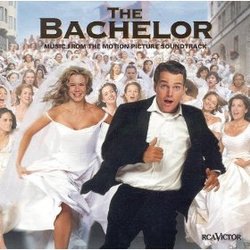 by David A. Koran June 23, 2001
3.5 / 5 Stars
Now, there are very few soundtracks in my own collection that instantly fall under the "oddball" category by just perusing the track listings, however, The Bachelor fits in perfectly. Being that we usually review primarily scores, it's kind of out of character for me to review a compilation album, but with one of my favorite "pop" stars, David Byrne (former lead of the new-wave band Talking Heads), getting opening track placement, I had to take a stab.

Of course, as mentioned above, David Byrne's take on Cole Porter's "Don't Fence Me In," whose original mix resided on the AIDS benefit album, Red Hot + Blue, starts off the mix of peppy pop that doesn't stop till Buster Poindexter's take on "Hit The Road Jack." Ahhh, to remember the 1980s. Granted, this is not to say that the entire album simply spans that decade of sometimes memorable, sometimes forgettable hits and misses. We also have entries from Louis Prima, Jackie Wilson, and Barry White, covering their hits from the 50's, 60's and 70's respectively. Barry White's entry, "You're The First, The Last, My Everything" has been heard quite a lot on film soundtracks in the past 5 years, sparking a kind of resurgence for the artist that helped, in one way or another, conceive a good chunk of the twenty-somethings out in the world today.

The rest of the album is littered with expressive salsa-influenced lounge jazz-like songs and score. Albeit, the score is restrained to the ten-minute medley-suite at the end of the album, but it correctly follows the same vein as the pop entries on the album. Actually, I can tell that at least on passage was inspired by Francis Lai's "A Man & A Woman (Un Homme Et Un Femme)" and was most likely temp tracked with it. David A. Hughes and John Murphy did justice to their interpretation and it flowed quite easily in the suite. Given the premise of the movie, the compilation, as well as the score serve the film well, even if it came and disappeared quickly at the box office, at least give a shot for a listen if you want something different for the tin-eared music appreciating society.