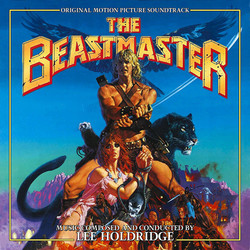 The script writers of The Beastmaster would listen to famous epic scores from the 1940s and 1950s by composers like Max Steiner and Dimitri Tiomkin. When they began to edit the film, they started tracking in music from these composers. Coscarelli knew of Holdridge's film music and had been impressed by Holdridge's violin concerto and, was very impressed with it. With The Beastmaster, Holdridge composed a large-form symphonic score, recorded in Rome, that complemented the film's sensitive characterization of Dar as well as providing an anthemic main theme for the character's power and heroism. The main theme is a broad, adventurous motif for full orchestra which suitably propels the film along. In addition, Holdridge provided a pleasant flute love theme over plucked harp, wind chimes and finger-cymbals; a low tympani motif for the evil, pagan priest; and a synthesizer motif used to reflect the sorcery and power of the Beastmaster. The Beastmaster remains one of the great fantasy film scores of the 1980s and continues to age well.

Previously released on compact disc by Quartet Records in 2013 as a limited edition release that quickly sold out, Dragon's Domain Records is excited to bring The Beastmaster back into the marketplace at the request of the composer, newly remastered by Digital Outland under the composer's supervision. The end result is a rendition of the score that most closely matches what Lee had imagined back in 1982. The booklet includes exclusive liner notes written by author Randall Larson with the participation of the composer. Dragon's Domain Records presents the score on 2 CDs. Disc 1 opens with the original album program from 1983 followed by the music cues as they appear in the movie in film order, continuing onto Disc 2.