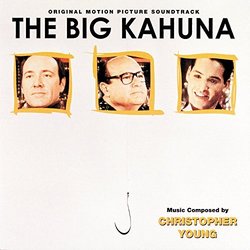 by David A. Koran June 23, 2001
3.5 / 5 Stars
For most folks, when you mention Christopher Young has scored such-and-such a film, they are expecting a dark and ethereal score. This isn’t a bad guess, knowing Chris has scored a large number of horror and thriller films during his career, but that’s making a very thin judgement. My first experience with Mr. Young was with Murder In The First, which I consider one of his best and most emotional and melodic scores. Of recent, Christopher Young has begun to take on more conventional projects like Wonder Boys and this current film, The Big Kahuna. I enjoyed Wonder Boys immensely, and I’m hard pressed to figure out why the film had such low viewership with such a great cast, director and story. The music was exceptional (both score and pop tunes), and The Big Kahuna is the same way. Unfortunately, I have a feeling that The Big Kahuna will suffer the same fate, even when it’s a good film with good stars. This film is adapted from a stage play ("Hospitality Suite"), and suffers a bit from the fact that it’s mostly dialogue, which has a tendency to bore the general populous.

Mr. Young’s score, and musical direction, help give the film a bent towards the "light-seedy" side by incorporating some lounge and bachelor pad music. This is perfect given the fact that Danny DeVito and Kevin Spacey play industrial lubricant salesmen. Danny DeVito’s character is choosing to retire from the business and Kevin Spacey is trying to deal with the fact that his friend and mentor is leaving him. In turn a newcomer, played by Peter Facinelli, is joining the team, and eventually Spacey’s role is reversed, and he becomes the mentor. A lot of smart dialogue exchanges take place, but nothing extraordinary regarding the story or events. Young’s score more or less helps set the moods and character colorings perfectly, slightly seamy, slightly off-kilter, from a time long gone, a missed generation. It’s lighthearted to a point, not entirely serious, even though a few times in the film, there are decidedly "deep-thought" moments. Young does justice to himself showing his musical diversity by handling such a wide variety of genres in his career. This film provided him a chance to snag a niche of music very few get a chance to explore.

For purchasers of this score, I’d say it’s a keeper, probably not something you listen to on a day-to-day basis but reasonably good nevertheless. As for fans of Christopher Young, add it to your collection next to Murder In The First, Wonder Boys and Jennifer 8, it’s a solid effort. I wished the music could have been a bit more, it only chimes in at a little over a half-hour, since the CD flows so nicely and seamlessly between tracks. If you’re a fan of Spacey, trot down to your local indie movie house and catch a showing of the film before it’s gone, it’s his typical wry character, but he’s so good at it.