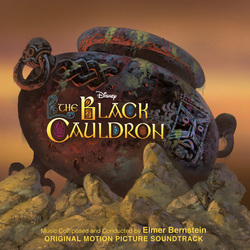 For veteran film composer Elmer Bernstein, the 1985 animated fantasy The Black Cauldron came at the end of a cycle of science fiction and fantasy films that included Saturn 3, Heavy Metal, An American Werewolf in London, Spacehunter: Adventures in the Forbidden Zone and Ghostbusters. Bernstein created a full-blooded, kinetic score, full of involving leitmotifs including a rambunctious theme for Gurgi, an ethereal, romantic melody for the Princess Eilonwy (often voiced by the ondes Martenot to create a magical feeling), a sprightly theme for the faerie-like Fairfolk, and crushing, malevolent music for The Horned Kings and the horrific army of "cauldron-born."

At the time of the film's theatrical run, a rerecording of selections from the score was released. This release from Disney and Intrada features the premiere release of the original soundtrack restored and remastered under the direction of Disney's Randy Thornton.

The Black Cauldron represented a grand experiment by the new, younger creative team at Disney Animation who would soon produce such hits as The Great Mouse Detective, The Little Mermaid and Beauty and the Beast, while maintaining the spirit of classically produced animation that had begun with Snow White and the Seven Dwarfs in 1937. Based on author Lloyd Alexander's The Prydain Chronicles, the story follows callow "pig keeper" Taran, whose young piglet Hen Wen holds the secret to the location of the Black Cauldron—a source of horrendous power sought by The Horned King. Armed with a magic sword and accompanied by an aging wizard, a foolish bard, a princess and a cowardly creature named Gurgi, Taran struggles to locate the Black Cauldron before the Horned King can use it to create an invincible army of the undead.