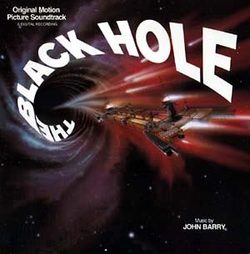 The 1970\'s provided an interesting, though sometimes questionable, wealth of variety for the immense talent of John Barry in terms of film projects, such as the strange, almost-no-Bruce Lee Bruce Lee film Game of Death, the weird, raunchy Night Games, the awful and awfully hilarious Starcrash, the lumbering, reviled King Kong remake and what are arguably the two most oddly underwhelming, atypical Bond films, The Man with the Golden Gun and Moonraker. After the 60\'s had provided Barry with so many career defining highlights, not the least of which were three Oscars and initially infusing James Bond with his inexhaustible musical mojo, the following decade seemingly approached Goldsmith levels in terms of the forgettable qualities of the films themselves. But as with Jerry, John Barry\'s scores always emerge untarnished by such misfires due to his unique, rich melodic gifts and this magic is on grand display in 1979\'s The Black Hole.

The Black Hole, as with so much cinematic science fiction of the last 30 years, only exists because of Star Wars. Once that particular wave rose in 1977, every studio in Hollywood rushed to produce a like-minded movie, all wanting to ride that wave into shore of cash on a rocket-propelled surfboard. Disney decided that instead of commissioning an original idea they would simply update a property they already owned and had produced decades earlier, Jules Verne\'s 20,000 Leagues Under the Sea and thus its story was launched into deep space with only minor adjustments. Add in Anthony Perkins, Ernest Borgnine, a hillbilly robot and the titular, swirling death trap and this concoction helped inspire one of the most enjoyable, popular works in John Barry\'s canon. I personally have known people who are not film score fans in the slightest and yet they can specifically recall the maddening, circular quality of Barry\'s "Main Title" for the film and how memorable it was. These same people then of course ask where they can get a copy of the album. Well, up until this year, the answer was nowhere, but in a move which simultaneously smiles and spits upon fans, Disney has released the original, digitally-recorded album tracks as an iTunes exclusive.

Kick-starting from the overtly proud, pomp & circumstance march of the "Overture" on through the crushing, ominous "The Door Opens", the strange beauty of "Six Robots", ostinato propelled action of "Durant Is Dead" and on to the exultant finale of "Into The Hole" (no jokes please), the score soars with so much melodic, harmonic and rhythmic invention, as befitting Barry in his prime. His style had begun dropping some of its initial jazz shadings and was exclusively moving towards a more lush, vast orchestral quality during this time, a quality that came to dominate the majority of his work in the 80\'s and beyond, with few exceptions, and continued to keep him popular when other composers of his generation had faded from the cinematic arena. For any casual John Barry fans who are only familiar with his Bond scores, Out of Africa and Dances With Wolves, I would suggest checking out The Black Hole as an entry point to an earlier time in Barry\'s career. Each track yields its own individual reward, as is often the case with his albums, but it also makes for a great, concise listen from start to close, pulling you inexorably through to the other side in a musical parallel of the cosmic whirlpool of the film.

Now just to reiterate, these tracks are only available for download on iTunes. There was time and effort spent on remastering and recreating the album tracks in the best possible sound for release, but then the decision was made to crunch this all down to a bit rate fit for online instead of properly presenting the music on disc. For this reason, I have had to apply a lower rating to this release, but through no fault of the music itself. It is surprising that since Disney went through the trouble to upgrade and release Wendy Carlos\'s score for Tron, then why was Barry\'s work on The Black Hole not deemed worth the jewel cases and inserts? Perhaps some day this will be amended, but until fans and those unfamiliar with the score can decided for themselves whether or not to check it out in this format.