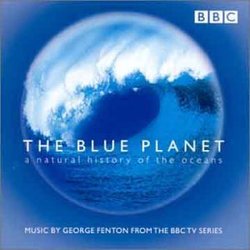 From the get-go, the title cut of George Fenton's The Blue Planet could knock even the most jaded soundtrack listener out with its rousing, emotional combination of powerful orchestral oomph and ethereal touch of chorus. If you are a fan of James Newton Howard's recent work (especially knockouts like The Sixth Sense or Atlantis), you will simply adore this disc from its first note onward. It's interesting when you stop to consider that Fenton wrote this music for an acclaimed BBC docuseries way back in 1996, long before Mr. Howard had landed either of the aforementioned gigs, the wondrous scope of The Blue Planet is even more impressive. But then again, with relatively overlooked masterpieces such as Final Analysis and the haunting Mary Reilly under his belt, George Fenton has always been one of the most talented and underrated composers around.

But back to the task at hand: The Blue Planet's second cut, "Sardine Run" is an intricately exciting scherzo. Fenton is one of the true masters of orchestration around today, and this stunning example dances between the colossal and the delicate with the utmost of ease. "Spinning Dolphins" creates a playfully circular motif for a flavorful Spanish-style guitar that ultimately launches into a thrilling waltz, and "Blue Whale" begins as a majestic, rolling hymn but then lurches forward into a quicker tempo, becoming another thrilling highlight. (You gotta love a sixteen track CD that has justified your purchase after only four cuts!)

"Thimble Jellyfish" and "Surfing Snails" are low key and jazzily spare, combining some funky bass and tinkling synth, ultimately sounding a bit like something out of a late 70's industrial film. They are the only things here remotely resembling a misfire - not because they're bad, per se, but because everything before and after it is so traditionally gorgeous. Another sort-of anomaly, the eerie "Turtles", dishes out some effectively quirky plucked strings and sinister piano rumblings, so much so that if someone had told me Thomas Newman (Mr. Eclectic himself) had composed it, I'd have been hard pressed to disagree.

Not to worry, though. "Emperors" returns the listener to a more traditional orchestral palette, and from there Fenton's score continues to amaze. With urgently slicing strings and another brilliantly heroic motif for horns, cues such as "Baitball", "Stingray" (which begins with a lovely and plaintive solo oboe), and "Elephant Seal March" represent film music of the most exciting variety.

"Sharks" treads into what could be delicate area for any film composer (thanks to Mr. Williams' seminal seventies contribution), but the capable Fenton keeps the cue (as well as the lengthy and ominous "The Deep Ocean") subtle and atmospheric enough to dispel any such comparisons. These sharks aren't out to get you, Fenton's music suggests: they're mostly just out there, swimming in circles and being generally creepy. Great stuff indeed.

"Frozen Oceans" and "Coral Wonder" take us into the disc's last lap, introducing a palpable sense of wistfulness for the subject matter, as sweet and moving as (but considerably less predictable than) anything John Barry might have given us. The album closes in much the same vein with its lengthiest track yet, a somber yet majestic elegy for "Killer Whales".

Like Ben Bartlett's wonderfully moody Walking With Dinosaurs, the documentary format allows Fenton to not worry so much about Mickey-Mousing every little beat, instead writing what amounts to a collection of stunning musical tone poems. So don't be swayed one whit by the television origins of this disc: not only is it fully (and gorgeously) orchestral, it is allowed a breadth of thematic development that even the biggest theatrical feature would envy. As represented on BBC's nearly perfect disc, it is fifty five minutes of magic that no collector should pass up.