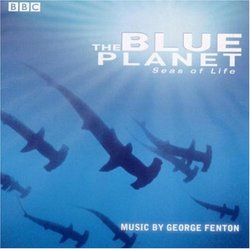 A television miniseries is often made to give the filmmakers more time and freedom than a feature length film would allow, which was the case with HBO's Empire Falls. Fortunately for film music fans, this extra length gives composers more material with which to work, and more time to develop the music. Brian Tyler's Children of Dune is a good example of this, and the same idea can be heard in theatrical series such as The Lord of the Rings and Star Wars, where the composer can maintain and further develop the music over an extended storyline. With this in mind, I had – perhaps unusually – high expectations for George Fenton's Blue Planet, a documentary miniseries from the BBC about life in the oceans; unfortunately, I may have expected too much. Thematically, the album does not feel like a whole – the main theme is more of a two note motif with a few variations on it – and works better as separate episodes, almost like a miniature symphony; as such, however, it does work.

At first, I wondered if this score would be anything like Sting's music for the IMAX movie The Living Sea, which used a handful of Sting's own songs, rearranged for the film; the rest of the score was composed by Sting directly for the film and had a light jazz sound with its piano and acoustic guitar base. Blue Planet is nothing like this, which is probably for the best, and the sound of Fenton's orchestrations capture the feel of the ocean. Each of the sixteen tracks on the album is an episode, with its own sound and tone and instrumentation, and a few related motifs thread through many of the tracks. It is orchestral, with sparing electronics, and makes for a rather pleasant listen.

The album opens with the title track, which has a majestic tone featuring the brass section, similar to James Newton Howard's Dinosaur. The motif mentioned above appears here: two notes, with a full, broad sound, dropping a fifth between them. This theme is repeated in "Blue Whale", but slower and is passed between a solo oboe, French horn, and then the brass. And toward the end, the motif is changed to include a few quick notes between the two as they descend. This variation continues in "Thimble Jelly Fish", the in-between notes becoming more of a slow trill. Toward the end of the album, the motif is varied even more drastically and become inverted: it's the same change of a fifth, but here the lower note starts first and moves up. This is heard in "The Deep Ocean", "Frozen Oceans", and "Coral Wonder". The final track returns to the varied motif, then the original from the title track. But again, even with these variations, it only appears in about half the tracks.

What this score does very well is capture the specific tone of each episode. The second track, "Sardine Run", opens with a staccato French horn and light percussion, and then the orchestra comes in with the same staccato patterns, and flute riffs in the background. It slows, but maintains the energy, brass, and staccato rhythms throughout. It captures the "run" from the title and as you listen you can imagine a school of sardines moving quickly as one. The following track, "Spinning Dolphins", changes completely from the sound of the first two and comes closest to the jazz sounds I remembered from The Living Sea. It opens with a solo flute and acoustic banjo, and the orchestra comes in behind with strings and horns. It is a complete change of sound and even of rhythm, as this track is a waltz, but it is appropriate for the dance-like antics of spinning dolphins. The pace slows to dramatic chords in "Blue Whale", waxes gentle for "Turtles", and turns menacing and strong for "Sharks". The high string chords in "Coral Wonder" were reminiscent of some cues in Newman's Finding Nemo. Each track is unique in sound and orchestration, appropriate for the subject matter of that episode of the documentary.

As a whole, this album fits the needs of the documentary, despite its minimalistic theme. It sounds good on album, with many rather beautiful cues, especially for fans of classical music, but may be a minor disappointment for those hoping for something more complex thematically. But Fenton has done an excellent job of capturing the feel of the sea and life within its depths.