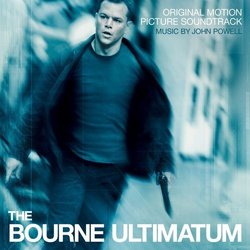 Like the movie, the album for The Bourne Ultimatum jumps straight into the meat of things… Action!! John Powell excels at propulsive action cues and from the very beginning ("Six Weeks Ago") we get driving suspenseful chase music. I make jokes about Media Ventures like some people do redneck or Polish jokes. But all kidding aside, I feel that Powell expresses the best of what the company's style has to offer. Everything that I don't like about their trademark style (the drum machine percussion, having a full orchestra play the same melody thus making it sound smaller) works exactly in this series favor. The action highlight of the album ("Tangiers") gives us a great use of drum and bass, ethnic instrument ornamentation with an aggressive string section melody. There's also that, what do you call it, echoing owl call? It just suits the lean thriller aesthetic of the series.

It's been five years since composer John Powell hit us with the first Bourne movie score and it has become one of the first representative scores of his solo career. Now that the series is done (for the present), what is peculiarl about the Bourne trilogy as a whole is how inherently small it is. There's nothing in this final film thematically that wasn't introduce the first movie. The music has been a series of motifs more than full themes and they reoccur only occasionally in the album. The Treadstone motif reappears in the middle of the action of "Man Verses Man" and even in the final track ("Jason is Reborne") there is a call back to the opening solo bassoon call from the two previous movies ("Main Titles" in The Bourne Identity and "Goa" in The Bourne Supremacy). Powell showed significant growth from Identity to Supremacy, reconstructed a more complex Jason theme but sadly there's never a full reprise of the theme. It is only referenced in the middle of action cues like "Tangiers" and "Man Versus Man." This is odd considering there's a fantastic reprise of the theme in the closing credits.

Like the endless action scenes, the tension of the album never abates be it for building suspense cues ("Assets and Targets") or extended cat and mouse sequences ("Waterloo"). I may just give Powell a free pass while I criticize others who use the same techniques but he always pops in a nice quirky detail and always changes up instruments. In "Assets and Targets" there's a brief slow down in with a church organ before picking up with his trademark drum ensembles to build tension again. I am pretty confident that he records many of the various ethnic drums live, eliminating that "looped" quality.

What has changed in Powell's work since then the first film? While the albums are never particularly deep, he clearly shows stronger development in the dramatic cues ("Thinking of Marie"). In the emotional climaxes "Faces without Names" and "Jason is Reborne," there is less focus on atonal acoustics and more mournful strings to drive the pieces.

Like the other movies and the album to Supremacy album, Moby's "Extreme Ways" wrap out the album. Only this time it has been remixed with a female chorus and a more upbeat tone that betrays the inherent melancholy of the song's lyrics.

So how does this all add up? It's a fun and well produced album, but it isn't emotionally complete in anyway. The soundtrack to Bourne Supremacy is still the best of the series and Ultimatum is only a part of something. So it should come as no surprise to learn that a good chunk of music in the film was tracked in from the previous two film scores, and a large portion of music heard in the Ultimatum soundtrack wasn't used at all in the movie. That incompleteness make this soundtrack simple an extension of the last one, like a B side if you will to Supremacy. And if you like the idea of that, then you'll like this.