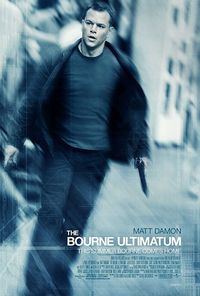 For Jason Bourne\'s third outing (with Matt Damon in the lead role), director Paul Greengrass returned, hot off of United 93. The problems that I had with his filmmaking in The Bourne Supremacy were excusable in that film, given the sensitive and intense subject matter, but when the overly shaky-cam returns in The Bourne Ultimatum, the result is a queasy stomach. Granted, it\'s not as bad as it was in Supremacy, and the intensity created by the fast editing and choppy camerawork adds effectively to the tension and driving energy of the film.

At the end of Supremacy, Jason Bourne (Damon) has finally made it to New York City, where he finds out his real name from CIA Deputy Director Pamela Landy (Joan Allen). Ultimatum actually starts off at the end of the Moscow chase, and fills in the gap leading up to his arrival in NYC. This includes a seriously intense sequence hunting down a possible Treadstone mole in Waterloo Station, a conflict in Madrid which reunites him with Nicky Parsons (Julia Stiles), and then they go to Tangiers, where the CIA is starting to catch up to Bourne. The action is intense, heightened by John Powell\'s adrenaline infused music, much of which seems to be tracked in from the previous two film scores.

In the end, The Bourne Ultimatum portrays the CIA as a whole as a rather malicious organization, with Noah Vosen (David Strathairn) searching to eliminate Bourne with such determination that you wonder what he has against him. As the big conspiracy unfolds, Bourne learns of his true identity and the circumstances behind his joining Treadstone. But it\'s all presented in a pessimistic way, so much so that even though Landy, Parsons and others are all inherently good and trying to do the right thing, they\'re portrayed as the minority, the only beacons of light in the big dark evil CIA organization.

The Bourne Ultimatum, whatever "message" it might try to convey aside, is one hell of a ride. It\'s an intense action film that was veritably non-stop from beginning to end, and is well worth checking out. Just sit in the back of the theater, since the shaky cam might make you lose your lunch if you\'re not careful.