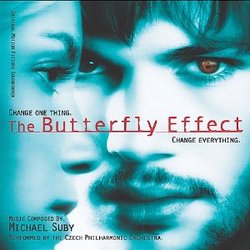 The opening theme from Michael Suby's The Butterfly Effect immediately calls to mind the gentle piano theme from Frailty with the addition of a haunting boy soprano vocal. However, after this, the score does not develop into much more than an underscore. Granted, there are some parts to the score that stand out, particularly the string orchestrations in "Kayleigh's Funeral" (easily the best track on the album) and when the main theme returns on the piano in "Drive to See Lenny". In addition, Suby uses electronic percussion to good effect in "Evan's Plan", "Evan Kills Tommy", and "Evan's Escape". "Prison Escape" is an action cue toward the end of the album with racing low strings and ending with a synthesized vocal that brings out the suspense and tension of The Butterfly Effect.

This score was rewritten a few times and stepped away from the original ideas that each time Evan goes back and changes something, that alternate reality would have a new theme and style in the music. It would have been interesting to have seen this, especially if remnants of the previous themes had survived into the future segments. The music changes feel ("Sorority Strut" and "Prison Escape") but no more than any score does over the course of a film. Much of this score is filled with ambient electronic noises which are almost inappropriate. The score would have been a better listen on album, at least, had Suby stuck with the piano and strings.

There are two apparent themes in the score, the main theme and one for Kayleigh's character, neither of which are utilized often. Rather, the music shifts between electronic ambiance and beats with the occasional piano version of a theme popping up. "Kayleigh's Funeral" as an example, Suby can write remarkably well for an orchestra, but this score only showcases that once or twice. "The Funeral" track begins with slow piano chords, before picking up the pace into the main theme on piano. The strings come in behind before jumping in with a full rendition of Kayleigh's theme, only heard one other time in "Kayleigh Loves Lenny".

This orchestration is sorrowful and beautiful at the same time; Suby nicely clashes chords in suspension before reluctantly releasing them. A decent score, I think the intended idea of changing musical styles with changing pasts on the screen would have been a better use of Suby's talents.