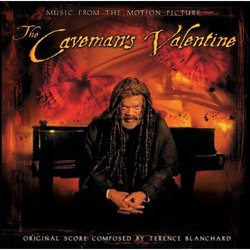 In The Caveman's Valentine, based on the hit book, Samuel L. Jackson is Romulus Ledbetter, a Julliard drop-out who lives in a cave in a park in New York City. When a body is discovered frozen in a tree outside of his cave, Rom decides to investigate the death and prove to his cop daughter that it was indeed murder. His quest will force him to confront his inner demons, including the reason for leaving his promising music career. With music as a vital and important part of the film, Eve's Bayou director Kasi Lemmons turned to Terence Blanchard to write the haunting and evocative score.

"Tuning - The Main Title" consists of an orchestra tuning up. As tends to be the case with this event, members of the orchestra play little bits of the pieces to come. It's a rather clever way of hinting at the powerful themes in the score, and in the film. "Moth Ballet" is the heart of the score. This piano-heavy piece is Rom's main composition, and is moving and highly dramatic. Convinced that he has Moth Serifs living in his head, and that a man, Stuyvesant, has been overseeing everything as part of his master plan from atop the Chrysler Building. This paranoia is evident in "Clink, Clink, Stuyvesant's Tower".

"The Bus", "Rom on the Street", and "Rom and Arnold Ride" feature quiet piano atmosphere with some percussion. It's slightly surreal, and has an almost jazz-like quality to it. "Bob and Betty" is a piece where Rom proves to a wealthy couple that he can indeed play piano. It's a striking and moving classical tome, but rather short. Some of the cues are dark, when Rom begins to get close to who he thinks is the murderer. "Musical Rampage" is a great moment in the film, where Rom confronts his suspect. It's a rendition of the "Moth Ballet" that becomes more intense with each passing measure.

"Lovemaking" is a soft and tender piece, which begins the more tender section of the album. "Rom and Lulu Drive" is another emotional piece, as Rom tried to connect with his daughter. Another sad and moving piece is "Caveman Outside The Cave". For the third act, the action and tension starts to heat up, "Rom on Balcony" and "The Letter" are two very poignant cues. In fact, the next few cues are very similar, and carry the tension over each one. The beauty and emotion in the music makes it the best part of the album.

I cannot for the life of me imagine why anyone would not want to pick up this album. It's an hour of mixed emotions, and great piano performances by Blanchard and Awadagin Pratt. Even if you don't manage to see the film (which was pretty good, but not the best thing I've ever seen), the score is so good that you have to get it, and treat it as a composition work.