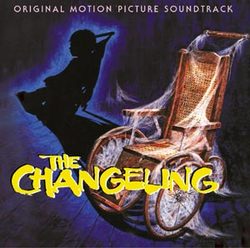 The history behind the original score composed for The Changeling may be one of the most interesting and complex stories to be found in the history of film music. Without divulging the convoluted story behind the creation of this score, which is well covered in the liner notes by Randall Larson, I will just say that it is possible for a film score to be penned by several composers, and yet keep a cohesive flow, and stand alone as a singular work.

Peter Medak's film has been a long favorite of horror fans, and it is a treat to evaluate the score as a separate entity after almost twenty years. The film is a study in subtlety, evoking chills through suggestion, rather than extreme visuals. Also contributing to the scares are strong performances by George C. Scott, his wife at the time Trish Van Devere, some wonderful claustrophobic cinematography by John Coquillon, and a memorable haunted house designed by Reuben Freed. It is difficult, even after reading Larson's notes, to tell exactly who contributed which cues specifically, yet it seems as if much of the score does fall to Ken Wannberg. The opening titles offer a sad and eerie theme with hesitant piano tones, backed by strings and harp. Much of the score relies on these two pieces of the orchestra, although later material will feature processed chorus, percussion, horns, giving the score a more diabolical edge. Even the requisite pastoral scene "Country Ride" is chilling, using piano arpeggios against a solo cello. The score closes with a grand string elegy, worthy of, and very slightly reminiscent of John Williams (Ken Wannberg is Williams' longtime music editor), finishing out the score in operatic fashion. It is important to note how much this film relies on music, both in its storyline, and the fact there are numerous scenes that rely solely on music and sound effects for the desired result.

In keeping with other scores of the ghostly genre, The Changeling has strong and memorable themes, notably a music box theme composed by Howard Blake, heard alternately on celesta and in a full bodied-romantic piano rendition. Currently, the music box theme has become something of a cliché in horror films, yet at the time of this score this was not so. The music box also figures into the plot as a prop, and since the film's main protagonist is a child, the theme does comment perfectly on the film, and is not simply dropped in to add a scary element. The score is constantly in a state of unease, and there are no full-blown symphonic love themes to be heard. Even the action cues heard late in the album are consistently grounded with rumbling strings creating suspense. Other effects the composers incorporate to create chills are a processed choral sound, and a wind machine which never fails to evoke goose bumps. The album closes with four bonus cues, the best of these being a full orchestral arrangement of the music box theme, something that is not heard in the film at all. The film version of the end title opens with the music box theme, before returning to more the more tragic theme. The alternate, while lovely on this album, would have been completely at odds with the end of the film, sounding too playful.

Highly recommended, and while the album may be a little long, this is one score worth preserving. The sound is quite good for a score that is beginning to age, with no inherent flaws, and only a small amount of hiss. The National Philharmonic plays up to their usual high standards, giving the string section a nice showcase, while leaving the brass (save for horns) at home. As previously mentioned, the liner notes are terrific, and include behind the scenes stills from the film, as well as a complimentary note from Alejandro Amenabar, director of The Others and a big fan of this film. The only complaint would be that I wish there was more information on exactly who composed which cues, and the history of the four bonus cues that close the album. This 1,000 copy limited edition will surely be hard to come by in the future.