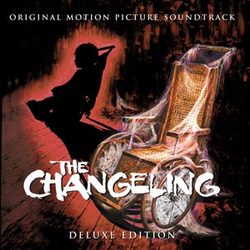 It may be somewhat redundant to review a score that has already sold out its limited edition run of one thousand copies, but a deluxe edition as lovingly produced as this deserves a close look. Percepto Records have been very considerate in responding to listeners\' calls for a reprint of their 2001 release of the score to The Changeling, Peter Medak\'s 1980 film about a composer, John Russell (played by George C. Scott), who moves into a haunted house. Not only has Percepto reissued the score, they\'ve re-sequenced it over two discs, one containing the full score as it appears in the film, the other containing a selection of alternate and unused cues. Accompanied by a 24-page booklet containing two excellent articles about the film\'s production and the troubled evolution of its score, this is certainly (as producer Taylor White points out in his afterword) a release that will satisfy score completists – that is, those who were quick enough to get their hands on a copy!

It\'s easy to see how this score took so long to register on the radars of enthusiasts. The film itself was largely ignored by audiences upon its initial release, despite garnering some awards and positive reviews. Presaged by the release eight months earlier of The Amityville Horror and overshadowed two months later by the release of Kubrick\'s The Shining, The Changeling didn\'t have the former\'s true-to-life claims to boast about, nor the latter\'s shock value. But it did have a lot going for it and, over time, has earned a cult following.

The other thing standing in the way of mainstream recognition was the lack of a big name composer. This score, instead, is weighed down by the presence of three composers, all very competent but none of them particularly well-known: Ken Wannberg was respected as an arranger and music editor for John Williams, but had not developed a high profile as a composer in his own right; Canadian Rick Wilkins was, by his own admission, brought in as a means of scoring tax breaks for the producers; and British composer Howard Blake was taken off the project when the film became a US-Canadian co-production.

Somewhat miraculously, this tumultuous process yielded a unified and consistently spooky score, drawing on a number of recognisable horror clichés, but enhancing them with a classy, understated approach through selective instrumentation. The near-absence of a brass section and the judicious use of woodwind means that most of the score is carried by strings, often in conjunction with piano or celeste. The "Main Titles" are a perfect example of this subdued approach. The chromatic intervals of the central theme are underscored by gentle runs on piano, conveying Russell\'s sorrow over the deaths of his wife and daughter, as well as the requisite sense of unease and foreboding.

The score grows in intensity as the mystery of the haunted mansion becomes more puzzling. "Bathtub Reflections" uses a creepy vocal motif to mark the first appearance of the boy whose ghost seeks retribution. The soprano voices, often distorted by an echo effect, are a clever device to suggest the presence of someone who, for the most part, is invisible to both the characters and the audience. "Ball Over the Bridge/It\'s Back!" takes it up a notch, exploding at its conclusion into a frenzy of whirring strings to suggest Russell\'s terror at the amazing power of the ghost.

It\'s followed by one of the album\'s standout tracks, "Séance/Talk To Us!", which accompanies one of the film\'s most effective scenes. It\'s a grippingly sustained piece, notable for its restrained instrumentation, utilizing low piano to build ever so gradually and then easing off in the last couple of minutes. An alternate version featured on the second disc uses a chorus of male voices to suggest the ghost\'s growing connection to reality. It is more enjoyable in isolation of the movie, but might have been a bit too heavy-handed to leave in.

It\'s in the last few cues that this score really takes off. The last minute of "The Attic Calls Claire" features some very colorful composition, evoking (with apparent shamelessness) both Bernard Herrmann\'s score for Psycho and John Williams\' Jaws score. "Finale/Resolution" contains passages that seem to predate Jerry Goldsmith\'s score for Poltergeist. Brass makes a rare appearance here, a tuba heaving at its lower register to convey a palpable sense of dread. The emotive, almost epic quality of its closing strains suggest the awe-inspiring power of the supernatural.

There\'s another element that also predates Poltergeist: the use of a lullaby as a key ingredient in the score. Howard Blake\'s "Music Box Theme" plays a central role in the film, connecting the past and the present most obviously when the soothing melody that forms Russell\'s work-in-progress spookily emanates from a music box he finds in the attic. The theme features in a number of forms in the score: sometimes as a brief direct source cue on piano, sometimes on solo celeste, and once in a piano/celeste duet. There\'s a treat on the second disc where the theme gets a couple of lyrical orchestral arrangements, here titled "Alternate End Title" and "Unknown Cue". It\'s a lovely piece of music, but would have been too sickly sweet for the end credits.

If there is a problem with this release, it\'s that it\'s so singularly directed at the die hard fans. For a casual listener, the score is too long and too unremarkable to make for a really satisfying experience. There are numerous highlights, as I\'ve pointed out here, but in between are a lot of cues that sound very similar and don\'t rely on thematic material. They work very well for the movie but become a bit of a blur on their own.

Understandably, then, deciding upon a star rating for this release has been difficult. For the fans who have their own copy, no star rating will capture the thrill of having the complete collection of cues and outtakes recorded for the film. More casual enthusiasts will probably find it impossible to get their hands on a copy, so a star rating will probably be redundant. In this case, I\'ll base my decision purely on the merit of the score alone.