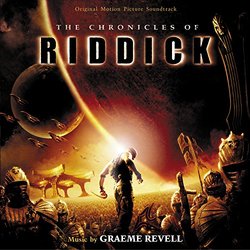 The Chronicles of Riddick

Review: Chronicles of Riddick, The

2000 was a prolific year for Graeme Revell who composed scores for four sci-fi films: the apocalyptic animation Titan A.E., the epic Dune miniseries, the dramatic Red Planet, and of course, the cinematographic masterpiece, Pitch Black. His scores ranged greatly from the quiet ethnic instrumentation of Dune to the operatic vocals of Red Planet, but all around represented some of the best music of Revell's career. His music for Pitch Black served as more of a horror score, but the main theme performed often on the French horn and backed by moving percussion helped to create a soundscape above a simple horror score that reflected the adventurous nature of the film. Four years later - with largely uninteresting scores in between (Daredevil, Collateral Damage, Tomb Raider) - Revell returns to the Pitch Black soundscape... and turns up the volume.

On a simple level, The Chronicles of Riddick is a dark action score. However, it is one of Revell's best scores in years and - despite much criticism for the direction this sequel took - compliments the film wonderfully. Revell uses all his sci-fi tricks from 2000 to create a dark score of epic scale. The underlying percussion remains, as does the Pitch Black main theme, though it is altered a bit so the chords do not resolve, which allows Revell to extend the performances of the theme ("One Speed", "Arrival at Helion"). There are new themes as well. Revell uses ethnic instruments and vocals to represent the different people in the film such as the Helions ("Save My Family", "Imam's Death") and the Furyans ("Furyan Energy"). There is also a theme for the Necromongers, which is percussive and electronic, similar in style to Elfman's Planet of the Apes ("The Chronicles of Riddick", "Necromongers"). This theme is fast paced with trilling trumpets and pounding percussion and very well suited to the dominating Necromongers. However, it also melds well with the Pitch Black theme ("Final Betrayals", "End Credit - Final Chronicle").

While much of the original appeal of Pitch Black was clouded by the overused CGI and nonstop action, there are elements of The Chronicles of Riddick that return to director David Twohy's original vision of Riddick's world. One of the most impressive scenes in the film was the sunrise on Crematoria, which is opposite to the eclipses in Pitch Black, but equally stunning, visually. The track "Purifier's End", which accompanies part of this sequence, also returns to the soundscape Revell created during the scenes in Pitch Black when the suns were setting.

Parts of the album are purely epic action music along the lines of Titan A.E. with a darker feel. Revell uses the full orchestra and choir in many of these cues ("One Speed", Helion Attack Pt. 2", "End Credit - Final Chronicle"). Other parts are slower; some is purely background music ("Aereon Foretells"), while other cues are hauntingly beautiful, such as "The Animal Side" and "Furyan Energy", which use a female vocalist. The tracks are out of film-sequence on the album, but they are mixed well to make a listening experience that never becomes boring or overpowering. Revell also returns to the Necromonger theme and the main theme enough with some good variations so that the music has a cohesive feel without feeling repetitive. Overall, The Chronicles of Riddick is one of Revell's best in years. He seems to have a talent for the darker side of science fiction and it is great to have him return to this genre.