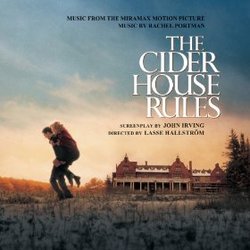 by David A. Koran June 23, 2001
4 / 5 Stars
With composer Rachel Portman, it's usually a crapshoot when it comes to the enjoyability of her music. There are usually two distinct categories I've heard from her, bold romanticism and off-the-wall quirky. The Cider House Rules, from the John Irving book of the same name, leans more towards the bold romantic side while having some off-kilter elements that come more from Irving adapted books that from Portman's own history (The World According To Garp and The Hotel New Hampshire). The possible reason for exclusion from any possible awards this year is not because of the quality of the music, of which is very good, but the lack of something different than the reoccurring theme.

Being England, I wouldn't think someone could get the feel of New England so well as Ms. Portman. She's has captured the "down home" earthiness of the woods of Maine and put a melody to it. The main theme that permeates most of this album is a broad and sweeping waltz like melody, with strings and light woodwinds to give it that "easy peaceful" feeling. The capturing of the period feel is accomplished through the use of solo piano, accompanied at times by harp and woodwinds, somewhat inspired by David Shire's score for The World According To Garp. Some of the quirkiness in the instrumentation is reminiscent of Portman's own work on Benny And Joon and The Road To Wellville (great scores, but under appreciated for the musical humor). The tenderness echoed throughout the score mirrors Homer (Tobey Maguire) and Dr. Larch's (Michael Caine) relationship as well as Homer's relationship with Candy (Charlize Theron). The score could have easily been done by any of the masters of the heartstring-pulling genre like Michael Kamen, John Williams, Elmer Bernstein, or John Barry. This time it is finely sculptured by Ms. Portman for this release, both as heard in the film and on another nicely done release from Sony Classical. I would only hope that at least the score gets a consideration for running for the Oscars®, but at least if you're a fan, or even someone who'd like to experience some Rachel Portman, the CD is a worthwhile purchase (along with the others mentioned above).