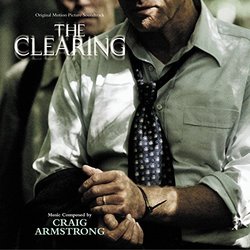 Craig Armstrong's scoring assignments are anything but predictable. His stunning reorchestrations of songs for Moulin Rouge and his classic choral climax from Plunkett and Maclean show his great skill at orchestral and choral writing. But then there are his lesser known scores, where little of this is apparent. The Clearing, starring Robert Redford and Willem Defoe, is one such score. As a psychological thriller, the ambient style of the score is appropriate for the film, but it does not fare well as an album release. The majority of the music is ambient electronics, with some solo piano and violin interspersed throughout.

There are three versions of the "Main Theme": Solo Violin, Solo Piano, and the Orchestral version, which closes the album. The theme is drawn out, and almost sorrowful in its performance by the violin and piano, but rarely appears in the rest of the music; two tracks which feature it prominently are "It's Blood" and "I Have Everything I Need". The former features a beautiful performance on violin. Parts of the score, which feature some of the heavier electronics, sound like Harry Gregson-Williams' work for Spy Game, particularly "I Love Him And She Admires Him" and "Wayne Makes A Run For It".

"She's on the Move" also features the pounding electronics, which are backed by a quiet horn line, one of the few appearances by brass in the score. The closing track, "I Have Everything I Need" is the highlight of the album, fleshing out the main theme on the piano and light string orchestrations. Despite the few moments of solo performances, but the score is generally ambient and low electronics, which make for a difficult listening experience between moments of beautiful music, which are, unfortunately, few and far-between.